Summer is approaching, which means peak firework season. Get seven pointers to keep the kids (and yourselves) safe. 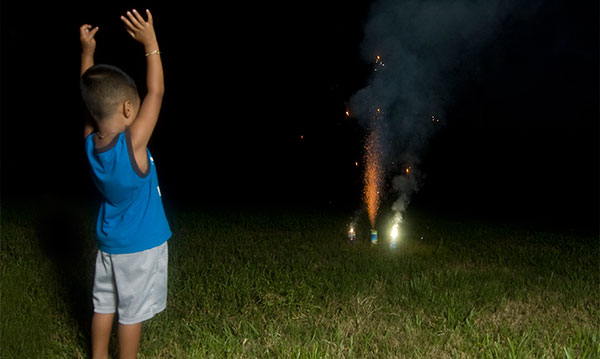 Each summer, those same fireworks your neighbor sets off in his driveway and the sparklers your kids wave around during the family Fourth of July celebration are responsible for thousands of emergency room visits.

These fun, seemingly innocent pyrotechnics pose risks – from house fires to burns – for young and old. The U.S. Consumer Product Safety Commission notes those younger than 20 years old accounted for about 50 percent of the estimated injuries in 2014, while 54 percent were above the age of 20 and 34 percent were people ages 25-44.

“Fireworks are fun and we know we all enjoy it, but they can cause serious injuries to children,” warns Dr. Rajan Arora, a pediatric emergency room physician at Children’s Hospital of Michigan, adding they’re dangerous to handlers and bystanders alike.

Roberta Davis, former Injury Prevention Education Coordinator for Kohl’s Injury Prevention Program at CHM, shares her advice on how families (including parents) can avoid firework mishaps and steer clear of the emergency room this summer.

1. Light them off in an open space. There should be no grass, no trees, no wires and no buildings nearby. “We see a lot of fires when people light off fireworks at home,” Davis notes. And, most times, the appropriate area to light them off isn’t a park either due to city ordinances. “In most cities there’s not really a great spot to light them off.”

2. Read the directions – and know where the fireworks are coming from. First, know what the firework will do once you light it. Does it spin on the ground? Will it shoot up into the air? Knowing what to expect will help you anticipate any potential mishaps. Second, only buy fireworks from a licensed vendor who has been state-approved. The licenses have to be posted at the stands, Davis adds, so look for those.

3. Be aware of your clothing. When lighting off fireworks, parents “should have no loose clothing, long sleeves – anything that’s could catch the firework.” Also, wear safety goggles to protect the eyes.

4. Never relight duds. This is the most common reason adults get injured, Davis says. Hose ’em down and put them in a bucket of water.

5. Sparklers aren’t safe. “Parents think they’re safe. Growing up, everybody had sparklers,” Davis says. But sparklers can burn at about 1,200 degrees. For kids under 5, sparklers caused the most firework injuries in 2014, CPSC reports. “They’re actually not regulated. You can buy them at your local store,” Davis says. Same with snakes and poppers, which should never be kept in pockets.

6. In fact, kids should be far, far away from all fireworks. “(Parents) should be making sure (kids) are a good distance away from them. That they’re not jumping and running around, and they’re keeping an eye on things.” Don’t leave lighters and matches lying around, either, since your child could pick those up.

Kids should never handle fireworks, Davis stresses. “You can’t sell fireworks to anybody under age 18, and nobody under 18 should be handling fireworks. There’s a reason why they won’t sell them to you under 18.”

7. Be prepared for any mishaps. Keep a bucket of water handy to dump the duds. Hose down fireworks after they’ve finished going off. And, don’t throw the remains in a trash can right after they’ve gone off or failed to light. Put them in a separate can.

All that said, just because families can purchase consumer fireworks in Michigan now, Davis urges families to “just be very cautious.” It’s a misconception that just because they’re for sale, they’re safe to light off at your home.

“The best thing to do is go see the pros light off the fireworks,” says Davis.

For more safety tips on fireworks and many other safety hazards, head to the Kohl’s Injury Prevention Program webpage at childrensdmc.org/KIPP.