A successful heart transplant at Children's Hospital of Michigan in early 2016 changed the course of 10-year-old Nielyn's life. 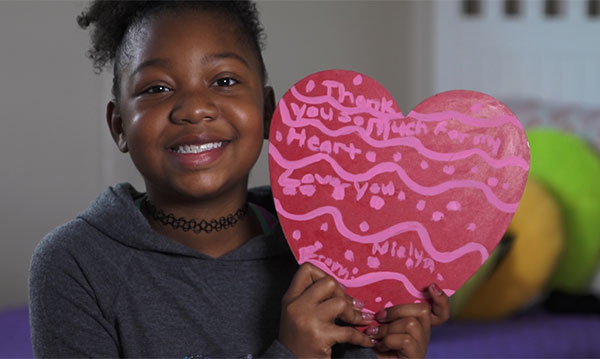 Nielyn Arnold had been complaining of stomach pains and coughing quite a bit one January 2016 night. The next day, the pain continued. It was a mystery to mom Sandy, who debated what to do.

“I decided to take her in.”

On Jan. 1, 2016, mom took 10-year-old Nielyn to Children’s Hospital of Michigan’s emergency department in Detroit for her abdominal pains. After some tests, the doctor pulled up a chair to ask Sandy some questions and discuss their findings.

What was really going on with Nielyn came as a shock.

“They decided to get a chest X-ray and with that they found that her heart size was actually quite large,” explains Dr. Jennifer Blake, pediatric cardiologist at Children’s Hospital of Michigan who helped treat Nielyn.

“The first thing (the doctor) told me is that she had an enlarged heart and I instantly started crying,” Sandy recalls. “I was shocked.”

Then, with further evaluation, doctors determined Nielyn also had something called restrictive cardiomyopathy, or RCM – a rare disease occurring in less than 1 in 1 million kids, the American Heart Association notes. With this life-threatening disease, the upper chambers of the heart dilate due to a backup of blood.

“That was like a double blow right there,” mom says.

All of Nielyn’s previous mysterious ailments (becoming winded easily, vomiting, trouble breathing and stomach problems), which were previously diagnosed as asthma or acid reflux, suddenly made sense. These issues were linked to RCM.

Unfortunately, medical treatment options are limited and tricky for RCM – and long-term, the outcomes are not good, Dr. Blake says. Research shows that within two years, these patients have serious medical emergencies, develop abnormal heart rhythms – or die. Those with RCM can develop high blood pressure in the lungs, known as pulmonary hypertension.

The course of treatment for RCM patients? A heart transplant.

“She already had evidence of increasing lung pressures, so she wasn’t really in a position to delay being listed for a transplant,” Dr. Blake says.

Quickly, the 10-year-old was added to the waiting list for a new heart.

“From there it was 57 days in the hospital before she received a heart,” Sandy says. She remembers how it felt to wait. “You know how many times I received that letter – you’re on the list, you’re off the list? It’s like a stab in the heart each time.”

After surgery, Sandy spoke with Dr. Henry Walters III, chief of cardiovascular surgery, who performed Nielyn’s transplant. “He was so like, just lost for words, because the way her heart looked, the heart muscle was supposed to be this tight, firm muscle. Hers was so enlarged and huge,” she says. “He said, ‘I don’t know how she even made it.'”

The days after the transplant were tough on mom. “At several times I just wanted to snap my fingers and switch places and do it for her,” she says. But one word Sandy used to describe Nielyn in those days? “A fighter.” She bounced back and went home in two weeks time.

Now at 11 years old – and almost a year after the whirlwind – Nielyn is making huge strides.

“She’s back with her family, her friends – where she wants to be,” Sandy says. The family moved in September from Southfield to St. Clair Shores. Nielyn loves her new school. “She’s growing, getting tall, developing – and it’s scaring me,” mom jokes.

She gives credit to the staff and experts at Children’s, who she says saved her daughter’s life. Though she’s had a few setbacks, she’s overall doing well and checking in regularly with the specialists at Children’s. “Seriously these kids are so resilient and so strong. She was the one actually keeping me going,” Sandy says.

The family continues to push forward, with a new, healthy heart ticking away inside Nielyn’s chest. Now, one year from the time her daughter’s serious condition was diagnosed, Sandy says, “It’s been a heck of year.”