How to Help Teens Be Their Own Health Advocates 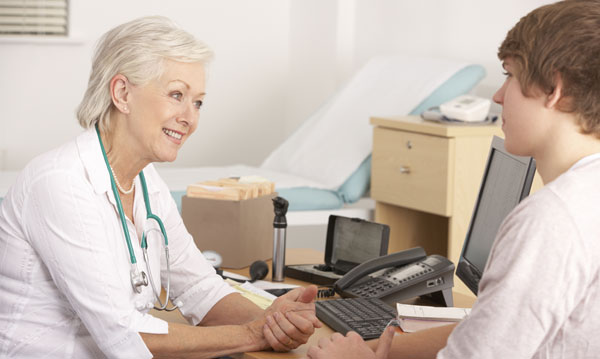 You’re in the doctor’s office waiting room with your teenager and finally her name is called. You both stand up, but your teen gives you a look that tells you to stay put.

Should you let her go in alone? What if she doesn’t ask the doctor enough questions?

It can be difficult to relinquish any responsibility when it comes to something as important as your child’s health. Teens will eventually need the skills to be their own health advocates. That includes learning to make doctor’s appointments, asking their physician all the pertinent questions and knowing how to follow up on tests. Teens also have increasing control over their personal health habits.

“This is such an important transition time in so many ways,” says Dr. Brian Kennedy, chief medical officer at UnitedHealthcare Community Plan. “They have to be willing to speak up and ask about questions that are sometimes of a sensitive nature. They have to be able to advocate for themselves.”

Teenagers may want to go into the exam room without a parent as early as 14 or 15, especially if they have concerns they don’t want to discuss in front of their parents. That could include questions about sexual issues, depression or behavioral health, Dr. Kennedy says.

Parents should know that a physician will not typically divulge things discussed in an appointment that the teen may consider private. “An exception would be if it was something considered to be potentially harmful to that teen or life-threatening,” Dr. Kennedy adds.

You can prepare your son or daughter for solo visits by brainstorming some questions for the doctor together. Write them down on a list to help your teen remember.

“That helps because a lot of times people either freeze up or they just forget,” Dr. Kennedy says.

Teenagers can also be taught about the importance of recording symptoms for the doctor in advance of a visit, he says. If the problem is headaches, for example, help your teen to keep track of when and how often they happen and what makes them better or worse.

Your teenager can usually continue to see his pediatrician until he is at least 18 and sometimes for a few years after that. Starting around age 12-14, most pediatricians will start to center more of the care on the teen and work with parents in a supporting role, Dr. Kennedy says.

“The parents should be very involved, but obviously the pediatrician and that child are really the ownership of that care,” he says.

A transition plan is usually in place by age 18 to move care to a new primary care physician. However, the teen’s relationship with his doctor is an important factor in how soon that happens, Dr. Kennedy says.

Teenagers should see their primary care physician at least once annually for a well check. Encourage your older teens to make an appointment if they have any concerns. Give them the phone numbers and insurance information they might need.

Teens should also be taught how to follow up with the doctor about ongoing concerns. This includes making follow-up appointments or calling for test results. That’s especially true when confidential issues are discussed that mom or dad won’t know about.

“If there’s follow up to be had, it’s important that they have to shoulder some of that responsibility,” Dr. Kennedy says.