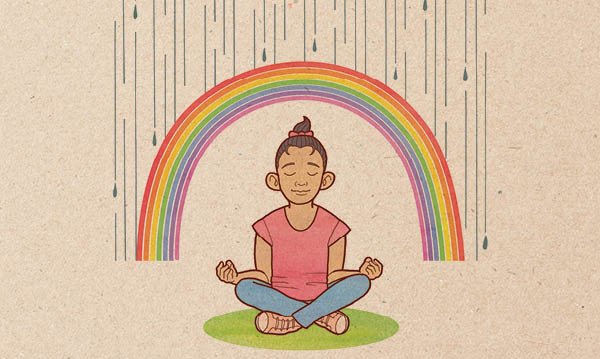 “Parents should be mindful that their actions can have lifelong consequences for their children,” says Dr. Lisa Woodcock-Burroughs, Ph.D., a licensed psychologist and nationally certified school psychologist based in Ann Arbor. “Not just in how their children are behaving, but also how they’re viewing the world and forming relationships with other people.”

Start with the everyday interactions you have with your child, Woodcock-Burroughs recommends. Listening is key.

“If they have a parent who is very dismissive or not responding to them in a way that’s going to bolster their mental health, then they can internalize low self-esteem or start to view the world as a very unsafe place,” she says.

Parents should talk about mental health with their kids early on. Just as you’ll point out shapes and colors to toddlers, kids can also be taught the names for their feelings and how to identify them.

“Help them label their emotions,” suggests Woodcock-Burroughs. “They don’t have that language. They don’t know what it feels like to be mad or frustrated or sad.”

And let your kids know it’s OK to feel those emotions – even if, as a parent, you don’t quite understand it.

“A lot of times parents say ‘you shouldn’t be mad about that, I don’t know why you’re angry,'” she says. “In doing that, we invalidate children’s feelings and tell them they’re not important.”

Instead say something like, “I understand that that makes you really angry.” Then help your child problem-solve the situation. For young kids, ways to feel better might include reading a book, getting a hug from mom, taking deep breaths or doing a physical activity.

“That way they can have a toolbox around these things and then they know when they need to access that,” Woodcock-Burroughs says.

Modeling those coping skills yourself can go a long way. That means reigning in the signs of frustration that you don’t want your kids to replicate.

“Kids mirror what they’re shown in the home environment,” she says. “If they’re seeing that the way parents address their frustration is physically aggressive or yelling and screaming, they’ll think, ‘That’s how I solve my problems.'”

Let your kids know that it’s always OK to talk with you about their emotions and teach them where to find support if they’d rather talk to someone else. Other trusted adults could include their pediatrician or school counselor.

It’s also crucial to spread the message that there’s no shame in having a mental illness or getting help for one.

“There’s a lot of shame around mental illness or depression, and so a lot of times parents don’t want to acknowledge that their child is depressed. They view it as a parenting failure,” Woodcock-Burroughs says.

But it’s crucial that parents are aware of the signs of mental illness and get help for a child if they need it. Mental illness affects people of all ages and across all demographics, and no one is at fault.

“We all do the best we can every day,” she reminds parents. “Sometimes the cause isn’t as important as what we’re going to do about it.”

Establishing consistent routines is key. Kids can feel that life is unpredictable when they don’t know what to expect each day.

“With the chaos of our modern life, it can be hard to have a set routine from day to day or week to week,” Woodcock-Burroughs says, but try to at least have routines around bedtime, getting up in the morning and meals. “The more routine and consistency there can be for kids, the easier they can internalize what happens next.”