Kids and Seasonal Allergies: What Parents Should Know

Is it a cold or allergies? Which medications are best for children? Dr. Amy Marks with Beaumont Children’s shares tips for parents. 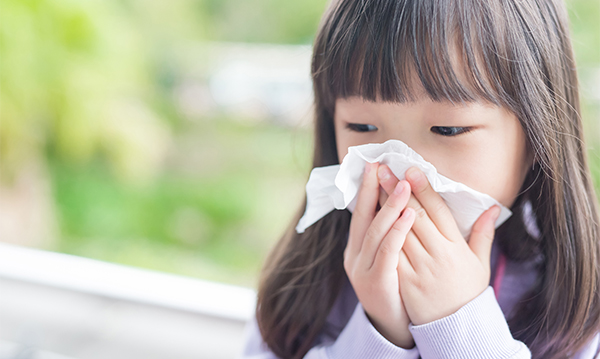 It’s a common thought among parents when they notice a child who’s sneezing or has a runny nose. But could allergies be causing what looks like cold symptoms? And how can moms and dads tell the difference?

That’s not always an easy task for parents, says Dr. Amy Marks, D.O., a pediatric allergy and asthma immunology specialist at Beaumont Children’s, who sees patients in the Beaumont Pediatric Subspecialty Clinics in Royal Oak and Troy. While the occasional virus isn’t unusual for kids, neither are allergies – they’re actually extremely common.

“Approximately 50 percent of the population has some sort of allergies. So it’s very prevalent,” says Marks, who’s also an assistant professor at the Oakland University William Beaumont School of Medicine. “Not all of these patients end up needing a specialist, but allergies are probably one of the most common chronic disorders a pediatrician may see.”

So, how can you tell if your child is affected by allergies rather than a cold?

“Typically, allergy symptoms are more chronic,” Marks explains. “They are not associated with fevers and kids typically feel well otherwise. They may be tired – secondary to medications or poor sleep – but they generally are more irritated than feeling ill.”

The length of time your child has symptoms is also key.

“The progression of a viral infection usually is a seven- to 10-day course, and kids get better over that course of time,” she says. “With allergy kids, they don’t. It stays. The allergies will linger.”

It’s always best to see a doctor to know for sure, though. “A cold can mimic allergies,” Marks says. “It’s really the progression of the symptoms that can tell us is this an allergy or is this a cold.”

Signs of seasonal allergies can begin as early as age 1 or 2, but symptoms typically ramp up as kids get a bit older – by age 4, it’s usually more noticeable.

“Sometimes with the younger children, it can be as simple as their eczema flaring when they’re playing outside in fresh-cut grass,” Marks says. “As kids get older they have more of your traditional signs – you start seeing the itchy eyes, sneezing, nasal itching, and you also can see congestion and asthma symptoms worsen during pollen season.”

Those symptoms tend to be worse when the child is outside, but they can even linger after that.

“Once you have that release of those allergy cells it can continue through the night and through the day,” she says. “The symptoms don’t necessarily go away. They can continue until pollen season ends or until they’re on the right medications and avoidance measures are made.”

So when is “allergy season,” anyway? For most people, that’s pollen season – and unfortunately it lasts longer than you might think. Here in the Midwest, tree pollen starts first – usually toward the end of March. Then there’s grass pollen season, beginning in May, followed by weed season around mid-August through September, Marks says.

“The child has been perfect and then all of a sudden in spring, trees are blooming and their eyes are swollen shut,” parents report, she says.

“You come across another allergen and because of what’s going on with your allergy cells, they are already primed or heightened from the pollen allergy,” she explains.

“Oftentimes if it’s just mild symptoms, parents will see some improvement. If those don’t work, it’s always fair to bring it to your pediatrician’s attention,” she says.

In many cases, it’s best to see an allergist who will go over your child’s history, look for signs of other allergic disorders, and perform any testing that’s needed.

“We often prescribe different dosings, change when they’re taking it and we also have other options that are not over the counter that are prescription,” Marks says. “Most importantly we can determine the triggers, discuss avoidance measures and starting medications at the appropriate time.”

Immunotherapy or “allergy shots” is another treatment option available for children with more severe allergic symptoms and other conditions, she says.

While anaphylaxis would be extremely rare with seasonal allergies, severe reactions including hives, difficulty breathing, coughing, wheezing or swelling are still possible.

While many parents wait until a child experiences symptoms before giving medication, they should keep in mind that offering it before the trees or grass even bloom, for example, helps the medicine work better.

Parents raising children with allergies should also know that narrowing down their child’s exposure to triggers can have a significant impact.

“I’m a big proponent of knowing your triggers – then you know what to do to avoid them and when to start medication,” Marks says. “When kids feel better during pollen season, they sleep better, they function in school better and they are just are happier children. Allergies can take a toll on missed school days, poor productivity and poor sleep. If they aren’t controlled, the kids can be quite unhappy and quite uncomfortable.”

So don’t be afraid to talk with your doctor about your child’s allergy symptoms, even if they seem mild. “It’s always important to bring up any symptom if you’re concerned.”