Kids and Therapy: How It Works and Why It Helps

What should you expect when your child starts seeing a therapist? A local expert shares information and advice for parents. 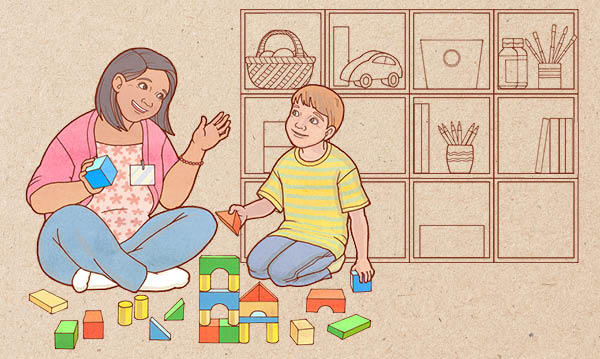 When you think of therapy, you may picture a pondering, serious-faced psychologist taking notes as a patient lies on a couch.

So when you consider bringing your child to see a therapist, it’s natural to wonder how kids could fit into that equation. Will your child open up to this person? What will they talk about? Will it even help?

But parents should know that there’s no “one size fits all” approach to psychotherapy for kids any more than there is for adults. With kids, especially, it’s a matter of finding the right fit, says Dr. Mitchell Parker, Ph.D., supervising psychologist at the Keller Clinic in Bloomfield Hills.

“Developing a rapport with the child is the most important thing to start out with,” he says. “Whoever is seeing the child has to work hard at getting the child to feel comfortable in coming.”

While psychotherapy can take many forms for people of any age, child psychologists use approaches specifically tailored for kids.

“For younger children, play therapy would be the primary modality,” says Parker, who has more than 30 years of experience working with families and children. This process, often used with kids as young as 3 or 4, lets children express their concerns and issues through play, which often comes naturally.

Cognitive behavioral therapy, which can start around age 7, is another main type of therapy used with children.

“Cognitive behavioral therapy works upon both the emotions and the thoughts and the actions of the child, trying to give them new scripts to deal with their problems,” he explains. “You have to modify it for younger children.”

Psychodynamic therapies – focusing less on the symptoms and more on the underlying interactions or issues the behavior stems from – are also an option. And for some kids, family therapy, where the parents and child are seen together, is best.

“There are many, many kinds of therapies out there,” Parker says. “You want to make sure that whoever the practitioner is can say research shows this is an effective way of dealing with this particular problem.”

Parents seek psychotherapy for their kids for a wide variety of reasons, from family troubles or behavior problems to ADHD or anxiety.

“Research is increasingly showing anxiety issues in pre-teens and teenagers,” Parker notes. “Anxiety has become a serious issue with many kids and in many schools.”

Finding a therapist who’s a good fit for your child should start out like any other major decision – seeking recommendations.

“They should try to get references. Find out who their friends or other people at school have worked with,” Parker says. “Try to get a list of a person or two who’ve been effective with other children.”

Then the parents should have an initial meeting with the therapist, who could be a psychologist, social worker or counselor. The therapist will take the child’s history and background information. Before your child’s first appointment, it might help to read a book together about starting therapy.

Most therapists see children without the parent present, except in family therapy. But parents might sometimes need to step in.

“There are times when it’s important for a parent to be involved – getting-along issues, play issues, or if I want to look at how the parent interacts,” Parker says. “Depending on the type of problem, sometimes it’s more important to work with the parents than it is to work with the children.” With kids up to age 7 or 8 who are having behavior problems at home or at school, he notes, the issue might actually be the child’s environment.

That’s not to say parents are making mistakes.

“A lot of parents feel ‘I must have done something wrong,'” he says. “It might be a mismatch of the parent or environment or child,” however, and a therapist can help determine what needs fixing or changing. “Sometimes it’s very difficult for parents to be objective. Having somebody who’s not part of the family, who doesn’t have expectations, who can look at what’s going on (can help).”

For some children, seeing a therapist is part of a treatment plan that might also involve medication prescribed by a psychiatrist or pediatrician.

Therapy is always a partnership with the family – and the hour or two a child spends each week with their therapist is typically just one small piece of the overall plan. Parents are usually given suggestions for home and school, plus “homework” for the family to work on before the next session.

“For the average child who’s having conduct issues, things have to be worked on during the course of the week,” Parker says. “I would suggest whatever therapist they go to, that within the first couple of sessions goals are set for therapy – and to let parents know exactly what the intentions are and reviewed periodically so that progress can be made.”

And there’s no shame in seeking out treatment. The stigma is decreasing, Parker believes, and more parents are becoming aware of therapy’s positive impact.

“If the behavior of the child is significantly disrupting the child’s life or the family’s life, then therapy should be considered as an option.”