How the K-SLP Helped Sanders Learn to Speak

When all other methods of speech and language therapy failed to provide results, the Kaufman Speech to Language Protocol made a difference. Learn how the K-SLP works. 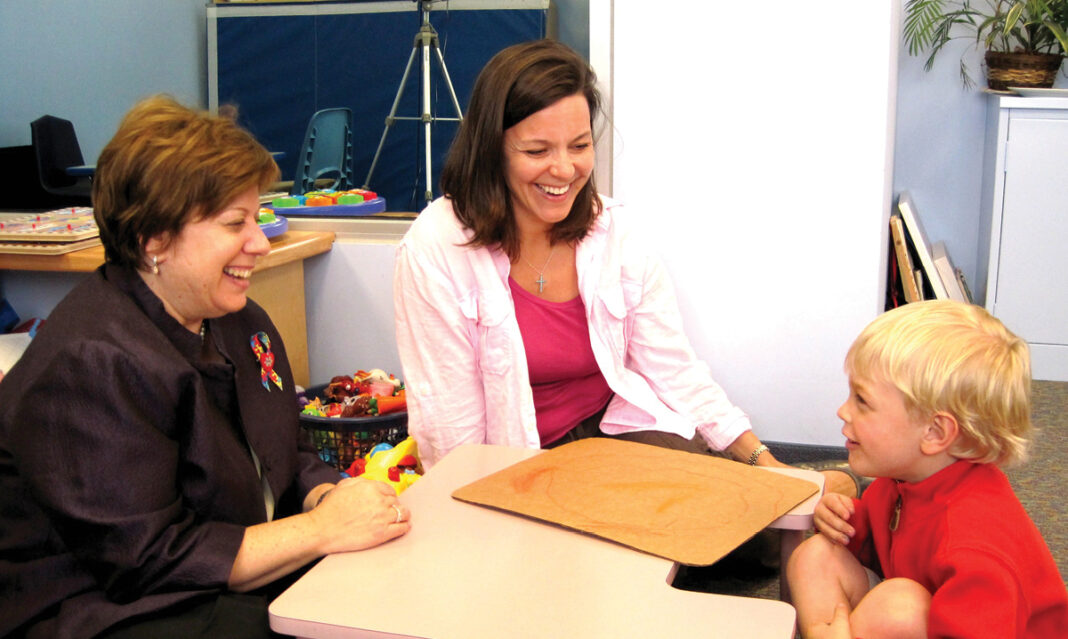 Sanders was a bright and outgoing preschooler who struggled to communicate clearly. Even at the age of 3, his speech was limited to “da,” his favored sound. “I knew at 11 months that something wasn’t right and even though he was getting speech therapy, he didn’t make progress,” says his mom, Rebecca Morris. Experts told her that Sanders was experiencing a speech delay. “I knew in my gut that there was more to it.”

Morris, constantly explaining Sanders’s unintelligible speech to strangers, reached a point where she says she didn’t want to take her son out in public. “He wasn’t shy and he tried to talk to people all the time,” she says. When Sanders slipped away at a local market, Morris realized with alarm that he wouldn’t be even able to tell people his name. “That’s when I knew we had to do something different.”

Through her own research and word of mouth, Morris learned about Nancy Kaufman, Speech-Language Pathologist and Director of the Kaufman Children’s Center in West Bloomfield. Kaufman developed the Kaufman Speech to Language Protocol (K-SLP), an evidence-based evaluation and treatment method for childhood apraxia of speech (CAS), other speech-sound disorders and expressive language development.

Morris and Sanders traveled from their home in Birmingham, Alabama, to meet with Kaufman and her team — initially for a single three-day evaluation, during which Kaufman would video record the protocol used so Sanders’s home speech team could continue programming. Both agreed that Sanders would benefit from additional therapy; the team worked together in Michigan for more than three months.

“From day one, Sanders progressed,” Morris says. “He went from zero intelligible speech to putting together six- and seven-word sentences. I get teary when I remember what it felt like the first time I heard him say ‘I love you.’”

The K-SLP is an effective shaping method

Using strategies from applied behavior analysis and principles of motor learning, the K-SLP treats childhood apraxia of speech through effective shaping methods, explains Kaufman. “When I see children struggle to speak, I help them combine consonants, vowels and syllables and then shape the movements to the best approximations of words when they don’t have a full repertoire of vowels and consonants,” she says.

By knowing and applying these rules through the K-SLP, Kaufman and her team simplify a child’s output in a logical, rule-based manner — and they learn what children enjoy most in their world to make it the focus of their speech. The K-SLP method was the key that unlocked speech for Sanders, says Morris.

“If you think there is something going on with your child, it’s hard as a parent to acknowledge,” Morris says. “I wondered if Sanders could go to school, have relationships, hold a job. All of those things came up when I was searching for help when he was not making progress.”

Today, Sanders is a high-achieving 15-year-old who excels in school — and speech. “You would never know he struggled as much as he did,” Morris says. “He talks so much now. He shares his speech journey and talks about going to Michigan. He remembers most of it and it’s a part of who he is. It truly changed his life.”

Learn more about Kaufman Children’s Center and the Kaufman Speech to Language Protocol at kidspeech.com.