Live from the Michigan Science Center! 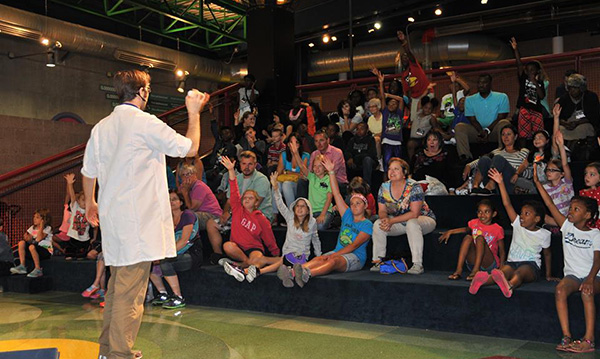 If you still associate science with a boring class you had back in school, a live show at the Michigan Science Center will change your mind in – quite literally – a flash. On three stages, talented presenters make science come alive with whiz-bang demonstrations of scientific principles that thrill everyone from little kids to their grandparents.

MiSci has three venues for live shows: The DTE Energy Sparks Theater, which demonstrates properties of electricity, the 4D Toyota Engineering theater, where moving seats and spraying water make you feel like you’re right in the presentation, and the Chrysler Science Stage, which can host any number of demonstrations and shows.

The live shows set MiSci apart from a lot of other, similar venues, says David Moan, lead presenter. “You might be able to go and touch a plasma globe somewhere else, but we bring it to you in a much more exciting way,” he says. “For us it’s taking that education and that entertainment value and putting it together in a much more heightened way.”

Many of the presenters who conduct the shows have a theater background, which allows them to present scientific concepts in a confident and engaging manner. Frequently, they’ll do plenty of studying on their own to brush up on the topics they are presenting.

Shows are tailored to their audience, Moan says. School groups of younger children will get more of a safety message in the DTE Sparks Theater shows, while older kids and adults might learn more about the Tesla coil or the plasma globe. It’s all aimed at hitting the intersection of pure entertainment and quality education in a way that’s uniquely MiSci.

“Teachers have to follow a very strictly laid-out path,” Moan says. “We get to play with science, and that makes our job easy.”

Inspired to see a show? Bring your child for free now through March 31 by clicking on this special offer.

Experience experiments like elephant toothpaste as a member at #MiSci!