The team at Children's Hospital of Michigan operated on him just days after his birth to eliminate life-threatening seizures. 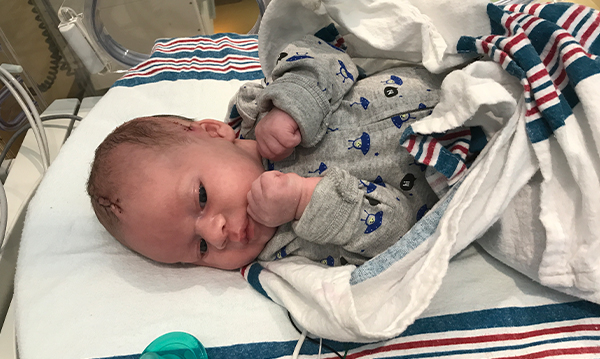 Will he be able to walk?

Will he be able to feed himself?

Will he be able to move his right side?

These were some of the questions Elisha Vertigan and Robert Ward had as the doctors at Children’s Hospital of Michigan in Detroit prepared to operate on their 8-day-old son, Myles.

Minutes after Myles was born, it was clear that something wasn’t right.

“As soon as he came out, he wouldn’t cry,” says Vertigan, who lives in Marysville, located in Michigan’s Thumb region.

“I really thought they were overreacting at first,” she says. “But it was a lot worse than I thought.”

It turns out the newborn was having over 100 seizures per day due to cortical dysplasia, which is an abnormality in brain development – and one of the most common causes of epilepsy.

Any of the seizures could have been fatal and, as an attempt to control them, doctors put Myles into a coma. “By the time I got to the hospital, he was already in a medically induced coma,” mom says.

Ultimately, though, it wasn’t enough.

In just a few short days, their newborn son would undergo a life-changing surgery

When different medications and a medically induced coma were not able to address Myles’ condition, Eishi Asano, M.D., Ph.D., director of Neurodiagnostics at Children’s Hospital of Michigan, recommended surgery to remove the part of the brain that was triggering the infant’s seizures.

Without surgery – and through the use of medication along with it – there was only 10-percent chance the seizures would stop. With surgery, there could be up to a 90-percent chance. Knowing that information made the decision simple for the parents.

“We both wanted to give him a chance to live the best life that he could,” Vertigan says.

Dr. Asano, along with Sandeep Sood, M.D., co-director of Pediatric Epilepsy Surgery at Children’s Hospital of Michigan, performed the seven-hour surgery on baby Myles. The portion of the brain that the doctors removed was right near Myles’ motor cortex, which could have impacted his motor skills. Fortunately, Vertigan says, her child would go on to develop typically.

In fact, when the surgery concluded, the seizures stopped immediately – and Myles’ EEG came back normal.

When Vertigan saw the incision the first time, she says she dropped to her knees and cried.

“It looked awful. I cried so hard. There were three or four nurses that walked by and saw me crying and stopped to see if we were OK,” she says. “From the nurses to even the janitors, everyone there was so supportive and tried to get you through it. They all genuinely cared.”

And Myles healed wonderfully, she adds. At 21 days old, he was released from Children’s Hospital of Michigan.

Aimee Luat, M.D., a neurologist at Children’s Hospital of Michigan, is Myles’ doctor, and she sees her young patient twice per year. Every doctor on his team keeps in contact to work together on Myles’ treatment, as well.

“The doctors gave him the best chance at life that he would have ever gotten,” Vertigan says. “I appreciate that they still care.”

For more information, visit the Children’s Hospital of Michigan website.