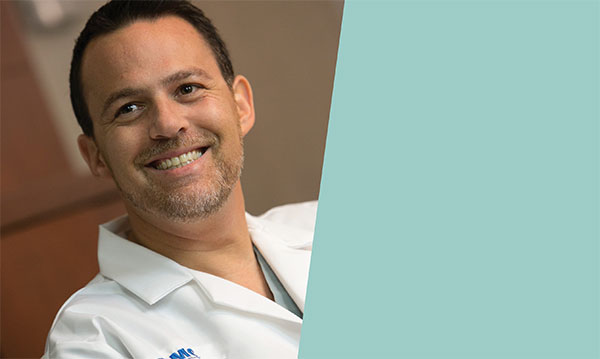 Healthcare is a two-way street – and Dr. Ethan Goldstein wouldn’t have it any other way.

As a prominent OB-GYN with DMC Medical Group and the director of the minimally invasive surgery program at Huron Valley-Sinai Hospital, Dr. Goldstein has spent his career building relationships with his patients and gaining specialized skills in robotic surgery to give them better outcomes.

“It’s nice to be able to have a skill set to offer assistance to patients and then improve their qualify of life,” he says. “It means a lot every day to be able to utilize all of that information, all those skills that we’ve learned over the years and know that it’s helping others. It’s gratifying, it’s rewarding and it’s nice to make a difference.”

He also makes a difference by involving his patients in their care – an aspect he believes is critical in the doctor-patient dynamic.

“I tell them basically that healthcare is a two-way street between me and them, and that we are here to sort of reach an understanding together as to what the best thing is for the patient,” Dr. Goldstein explains. “What’s best for one person is not necessarily best for another.”

Questions are encouraged in his office and a patient would never be shamed for their “Google” research.

“It’s our job to sort of make sure we are embracing those things and explaining to them why that’s a valid point or not a valid point,” says Dr. Goldstein. “Often they may bring something up that may change the direction of the conversation and that’s super important.”

An only child and the son of a physician, Dr. Goldstein says he grew up wanting to emulate his father and got interested in the OB-GYN specialty during his rotations as a medical student.

“I became really intrigued by it because of both the office medicine and surgical aspect of it,” he says.

Though he was born in Southfield, Dr. Goldstein’s parents moved his family to southern California when he was young to escape the Mitten state’s snowy winters. Then, he laughs, “their only child turns back and goes back to Michigan.”

Dr. Goldstein and his wife, a teacher, now enjoy taking their three children – ages 6, 12 and 14 – back to southern California to see their grandparents. They also enjoy trips to the Petoskey area where his family has roots and Dr. Goldstein spent time as a kid. In fact, his whole family traveled from Newport Beach to Petoskey, so he could have his bar mitzvah there.

“It made the front page of the Petoskey Gazette,” he laughs.

Dr. Goldstein sees patients at his offices in Bloomfield Hills and Commerce Township, where a unique team approach is offered.

“In my practice, the way it works is each of us does something a little different,” he says, with a nurse midwife and other doctors each having their own specialties. “It’s nice. Patients get an expert in our office for all the things they need.”

Between busy days with his family and working with his obstetrics and gynecology patients, Goldstein finds gratification in his work and feels good about the ways the medical field is changing.

“Gone are the days where the doctor says ‘do’ and patients automatically go with it,” he says. “We’re more of a give and take.”

More patients are saying, “Well, I read or I saw…” and that’s important to the process.

“My biggest goal is to try to reduce the number of open or total abdominal hysterectomies, which are often not needed,” says Dr. Goldstein. “That’s happening and it’s partly due to patient input and self-advocacy.”

Looking for a doctor who puts the “care” in health care? Find one at DMC Medical Group where you can book appointments online in minutes. Or call 1-888-300-DOCS.