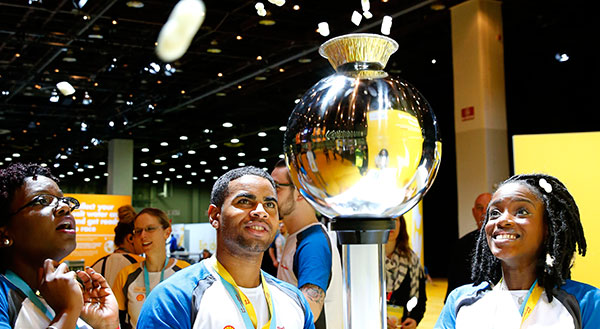 When the Michigan Science Center opened in 2012, management chose the new organization’s name to reflect its status as a regional and statewide STEM hub. Of course, if you live on the west side of the state or in the UP, you likely don’t get to MiSci very often. But thanks to the Traveling Science program, the Michigan Science Center brings its blend of showmanship and science education to audiences throughout the state.

“Traveling Science is an extension of the museum,” says Charles Gibson, outreach coordinator. “We bring activities such as workshops, presentations, and assemblies to schools, libraries and community events. We access a lot of people who are not able to make it to the science center.”

The aim, says Gibson, is to offer presentations that are captivating for large-scale audiences of all different ages. “Age doesn’t even really matter in a lot of cases,” says Gibson. “The demonstrations and activities we do span such a huge range that everyone will learn and have a great time.”

Themes include “Kaboomistry” (combustion experiments) and a summer Superhero Science program that focuses on the scientific concepts behind superpowers.

With Traveling Science hands-on workshops, participants can do everything from extracting DNA to dissecting a cow’s eye; other workshops involve building batteries out of potatoes or making slime. Parents can even hire Traveling Science for birthday parties or other special events. It’s an active, engaging way to learn scientific concepts, Gibson says. “Participants will get right in there and do the science themselves,” he says.

Traveling Science impacted 65,000 people last year and visited 31 counties in Michigan, nine of which were in the Upper Peninsula. The idea, says Gibson, is to make people aware of the science center as a resource for learning.

Gibson says traveling the state is a great experience, and so is spreading the message that science impacts our daily lives. “You can look at something simple and explain the science behind it, he says. “The most exciting thing is when you teach a kid something they’re not expecting to learn.”