Maple Beach at Kensington Metropark is the first of its kind for Huron-Clinton Metroparks. Learn what makes it special then see it for yourself. 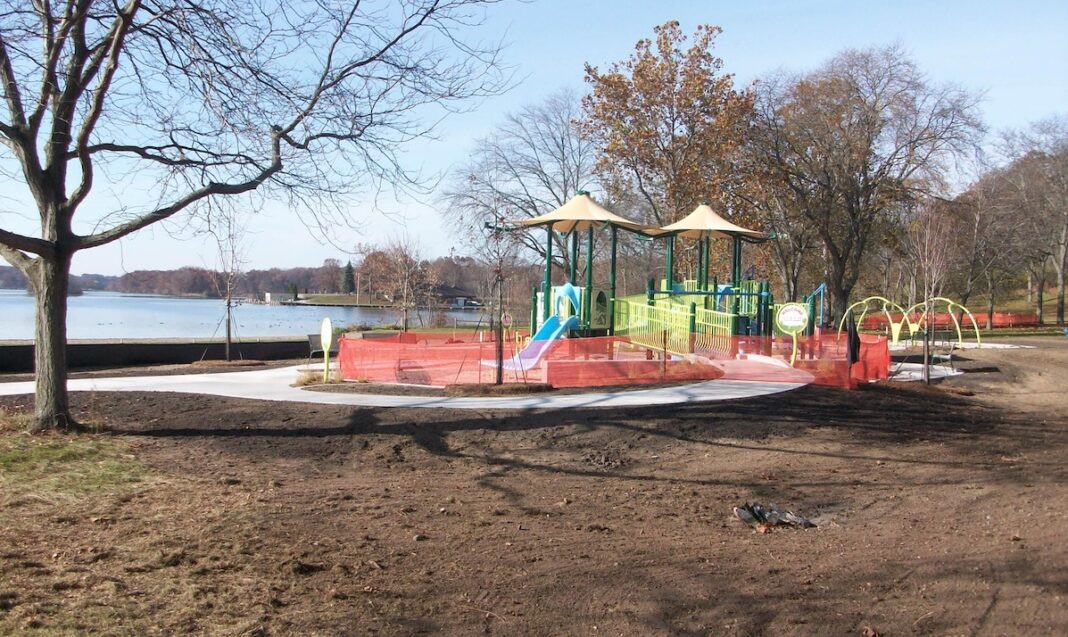 “Play is the work of childhood,” according to Swiss psychologist Jean Piaget. He was the first to make a formal study of childhood development through playing.

Children learn many useful lessons on the playground, including how to share, take turns, and cooperate. But, for children with different abilities, play dates, trips to the park and playgroups can be daunting.

With the opening of an accessible playground at Maple Beach at Kensington Metropark, parents of children with special needs will have a family-friendly play resource. Maple Beach playground is the first of its kind at the Metroparks and is highly unique, even throughout the region.

“Everyone needs safe, fun places to play and spark imagination, and there are few universally designed playgrounds across southeast Michigan currently,” says Nina Kelly, Chief of Planning and Development for Huron-Clinton Metroparks. She is currently overseeing the development of the new playgrounds.

“The goal of this project was to create an accessible playground to be enjoyed by all park patrons, inclusive of those with cognitive, emotional, physical, and intellectual disabilities,” Kelly explains.

Through the Fun, Accessible, Inclusive Recreation (FAIR) Play coalition, multiple organizations reviewed the new playground to ensure that it’s fully inclusive for all abilities and ages. The space includes a fully accessible design to provide stimulation for all senses.

“Certain playground pieces have tactile elements that provide a multi-sensory experience,” Kelly says. Visitors can use the senses of touch, and hearing while using the playground space. “Certain panels, such as the magnifying panel and the nature sounds panel, enable and encourage the use of multiple senses,” she says.

Piaget would certainly approve. He also theorized that through the senses and motor abilities children gain a basic understanding of their world. Providing opportunities for multiple experiences involving several senses can help children with special needs learn and enjoy their environment.

Another outstanding feature of the new playground is the “We-Go-Round” an update to the old “Merry-Go-Rounds” of bygone years. “The We-Go-Round allows independent wheelchair access and operation of the spinner. Universal design principles were taken into consideration with the selection of these elements,” Kelly says.

Not just for kids

Maple Beach playground can be used by individuals of all ages, Kelly points out, and was even designed to be accessible for adults, parents and grandparents of all abilities.

“While people generally think of playgrounds as being targeted toward children specifically, this playground will enable adults, parents, and grandparents with or without disabilities to be engaged,” Kelly says. “The overall improvements to the surrounding site also include a new restroom building and accessible paths to the beach from the parking lot, so a family could spend a good part of the day here, enjoying the park.”

Accessibility is vitally important to persons with special needs and Maple Beach has such built-in accessibility features. “There are several accessible elements, including rubber surfacing for easy access, ramped access to decks on the structure, transfer stations to all four slides, cozy areas for quieter play, social elements for group play, and shade elements,” Kelly says.

The opening of the Maple Beach playground is planned for June, just in time for summer.

Accessible recreation is an important goal of the Metroparks, which is committed to removing barriers, creating and improving access, and increasing recreation opportunities for all.

Expect to see even more accessible features in your Metroparks’ future. In addition to the Maple Beach playground at Kensington, Lower Huron Metropark will soon have a large new playground as well.

Plan your own visit. Learn more about Huron-Clinton Metroparks at metroparks.com.