Parenting a Child with Tourette’s Syndrome

Learn about this misunderstood syndrome and how to get help for a child who is struggling. 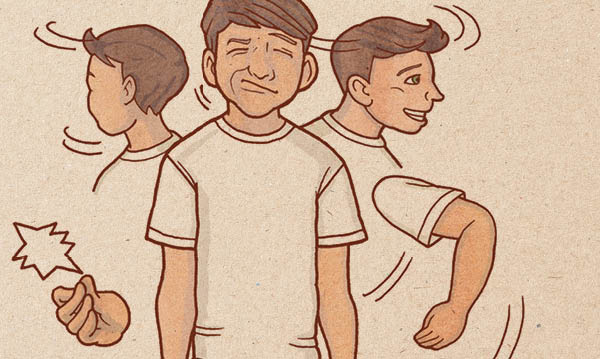 It could be as subtle as a shrug of the shoulders or a blink of the eyes.

The early signs of a tic disorder like Tourette’s syndrome usually begin during childhood, often raising alarm among parents. Tourette’s, after all, is associated with many assumptions about things like outbursts that severely impact a child’s functioning.

“At first when a child is diagnosed, it seems very bleak,” says Jennifer Parmenter, chair of the Tourette Association of America – Michigan Chapter and the mother of children with the condition. “(You become) very worried. Am I looking at a lifetime of special schools or being teased?”

Those are common concerns, she says, but there’s good news: “It’s really not as bad as what you think. You kind of just have to take a breath and take one day at a time.”

Tourette’s syndrome causes tics, which are involuntary, repetitive movements or vocalizations. Tics often first appear between the ages of 5 and 7, according to the Tourette Association of America, and as many as 1 in 5 school-aged kids will have tics at some point.

Other common motor tics include head shaking or face grimacing, while vocal tics can include throat-clearing, coughing or shouting. But when is a tic a temporary phase and when is it a sign of a tic disorder?

It depends on various factors, experts say, but only about 1 in 100 children between ages 5 and 17 have a tic disorder. Boys are more likely to be affected.

To be diagnosed, a child needs to have had at least two motor tics and one vocal tic before the age of 18, the association reports. The tics would last more than one year, even if they wax and wane in frequency.

“It changes every day,” Parmenter says of the symptoms of Tourette’s syndrome. “They come and they go. It can be a roller coaster ride, so you have to kind of be open to whatever’s going to come.”

The uncertainty over these constantly evolving symptoms can be a struggle for parents. But it’s important to note that Tourette’s syndrome is actually a neurological condition.

“I think a lot of people are under the impression it’s a mental illness,” Parmenter explains. “It’s a neurological condition and it can affect us mentally.”

Tourette’s has a high rate of comorbidity with mental illnesses. According to the Centers for Disease Control and Prevention, 86 percent of kids diagnosed with Tourette’s also have been diagnosed with at least one other mental, behavioral or developmental condition – most commonly ADHD, anxiety, behavioral or conduct problems, depression, learning disabilities and autism.

If you have a child with a tic disorder, support is available. The Tourette Association’s Michigan chapter hosts monthly parent groups and other resources, including a special education coordinator who helps advocate for students.

“Seeking out support is a great way to get through it,” Parmenter says. “Learning as much as you can about the disorder itself is helpful – and also just learning about great parenting techniques for what’s to come.”

Sometimes, just knowing you’re not alone has a significant impact.

“You realize, ‘I guess I’m not the only person with a kid who does that.’ It makes you feel not isolated,” she says.

The stigma associated with tic disorders, and the mental conditions they often go along with, can lead some parents to avoid seeking out help.

“I have met other parents who don’t like to talk about it or don’t want other parents to know, or who don’t want their own kid to know,” Parmenter says. “There is a stigma. I would think with more and more awareness we can break the stigma so people do feel comfortable talking about it.”

While there’s no cure for Tourette’s, some medications and behavioral treatments can help, the CDC notes. Parents can also seek out special accommodations through their school district.

“Just like every person is different, every case of Tourette’s syndrome is different,” she says, and it can be a challenge for teachers to know how to best meet the child’s needs. “It’s not easy for anybody, but having support and going into the school and getting the right accommodations is key.”

Parents should know they didn’t do anything wrong to cause Tourette’s syndrome in their child. According to the CDC, researchers believe it is inherited.

“You’re born with it,” Parmenter says. “It’s a genetic condition. Just like asthma, you shouldn’t be ashamed of it. It’s just something that you have.”

If you notice your child has a tic, a common rule is to avoid calling it out.

“Most of the time, I find with tics that if you bring attention to it, it’s going to continue and get worse sometimes,” she says. Keep in mind that kids truly can’t help what they’re doing – “it’s uncontrollable,” she says, and it can get worse with stress.

And don’t be afraid to talk to your child if they notice someone else with a tic.

“I think the more we are accepting and the more we do talk about it, the more it’s not shunned or that others need to be embarrassed by it,” she says. “It’s just a childhood disorder that a lot of kids have.”