Penguins Galore at the Detroit Zoo 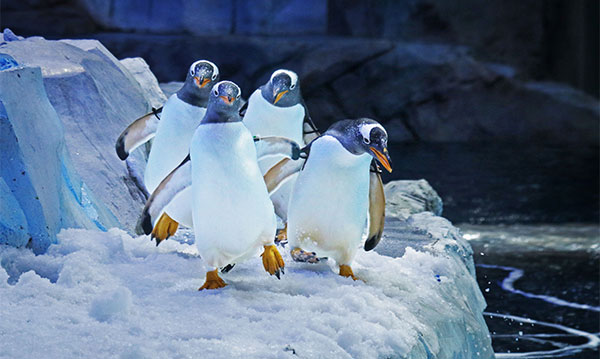 The Detroit Zoo has a responsibility that reaches far beyond providing a fun place for families to learn about animals (though that’s a big priority!). The Detroit Zoological Society (DZS) steps up to demonstrate the importance of wildlife conservation, including rescuing animals and even working on various animal conservation projects worldwide.

A huge example of the Zoo’s emphasis on providing animals with a fabulous life is the brand-new state-of-the-art Polk Penguin Conservation Center. The 33,000-square-foot iceberg-inspired facility is home to more than 80 penguins of four species. Visitors will see the prominence of animal conservancy woven into the space.

Take a look inside the world’s largest facility for penguins and what it took to make it such a wonderful home for its winged residents.

For visitors, it’s a fully immersive experience, whisking them away to Antarctica the second they walk through the door. The entrance ramps include a 360-degree 4-D experience complete with blasts of air and mist. The entire space was inspired by Sir Ernest Shackleton’s legendary early 1900s expedition to the frozen continent.

“We saw this as a great opportunity for people to experience what the Antarctic environment is really like,” says Carter, who was involved in the creation of the center from the start.

See the penguins waddling around rocks above water and walk down a series of ramps until you reach the center’s coolest feature: a 25-foot-deep, 326,000-gallon underwater tank and gallery. Enjoy the thrill in watching the gentoo, king, macaroni and Southern rockhopper penguins swim above and around you.

But for the penguins who live here, the Polk Penguin Conservation Center is truly a haven – and a groundbreaking one at that. According to the DZS, more than 1,000 people came together to build it. A crew even did field research, traveling to Antarctica “to be in penguin spaces in the wild, (and) get an idea of what it looked like, what it smelled like, what are penguins experiencing, what’s the temperature like,” Carter notes.

Through observing exactly what penguins need to thrive in the wild, the Detroit Zoo was able to construct a space that would meet the birds’ needs. The aquatic area, for example, may be an amazing viewing experience for visitors, but it’s essential for the penguins, who can deep-dive in it just as they would in their natural habitats.

“In application and design we got this big cool space with a lot of the things that we believe make their lives better in terms of what the environment is like,” Carter says.

The Polk Penguin Conservation Center is “designed to set a new standard” for the care of penguins, ensuring the birds have space to live to the fullest, the DZS notes.

Of course, teaching the importance of animal conservation is a big part of the experience. While penguins face the threat of predators in nature, Carter explains, that isn’t what we should be worried about. The true threat to penguins as a whole, he says, “is how the environment is changing – and that’s a result of us. Human use of the planet is impacting the planet, even those places we don’t think about.”

As Zoo guests exit the Polk Penguin Conservation Center, they can “engage with touchscreens to choose a place where they can make a difference,” Carter says, like reducing water use or choosing to carpool to work and school. While these are small changes, “change has to happen at the individual level and it can, in fact, have an impact.”

But teaching about penguin conservancy inside the Zoo is just the tip of the iceberg when it comes to the organization’s efforts in ensuring all animals thrive. “We have a number of conservation programs happening right here in Michigan,” Carter says, including the endangered Great Lakes piping plover, a tiny shorebird.

The DZS’s research and surveys of various species continue around the globe, too. The DZS is involved in a long-term amphibian survey in the Amazon, helping the International Union for Conservation of Nature (IUCN) gather information for assessments. Plus, the DZS has worked in China to study red pandas and snow leopards. It also financially supports the Polar Oceans Research Group in Antarctica, which for more than four decades has been studying ecosystem changes and its impact on Adélie penguins.

The DZS’s stances on animal welfare and its emphasis on humankind’s crucial role in animal conservation is all part of the Detroit Zoo experience.

“One of the biggest impacts a zoo can have is changing individuals’ behaviors,” Carter says. “We’ll probably get 1.5 million through our gates this year, so that’s a tremendous opportunity to start to create larger scale change.”