Playground Rules Every Parent Should Teach 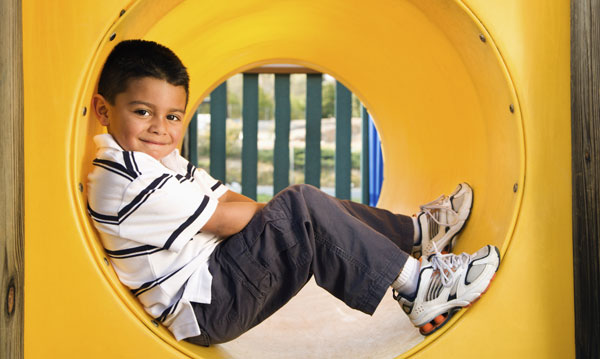 It’s all fun and games until someone takes a swing to the head.

“This is probably the most common playground injury kids sustain,” says Dave Byrum, owner of New Hudson- and Utica-based Kids Gotta Play, the only Michigan retailer of the Rainbow line of play equipment. “Kids often walk in the path of moving swings, and it’s always the little kids who get the brunt of it.”

The same is true for the area in front of the bottom of slides.

“Little kids standing at the bottom of a slide often get hit by bigger kids coming down with a lot of momentum behind them,” he says.

Byrum advises parents to talk to their children about the “safety zone” around swings and slides, reminding them to watch out for other kids at play on these two pieces of equipment in particular. For those little ones too young to understand these words of caution, a parent’s vigilant eye is key.

“You have to be right there with toddlers and other kids who simply don’t know to exercise caution around moving swings and busy playground slides,” he says.

And when first installing a backyard play structure, Byrum cautions parents to leave ample space behind and in front of swings and at the bottom of slides.

“Kids simply can’t resist the temptation of jumping from moving swings,” he says. “Make sure there is nothing in their path on which they could land and injure themselves.”

Byrum calls this the “jump and tumble area” and recommends at least six feet of space around these areas. As for other rules of the playground, Byrum suggests parents keep toddlers away from the monkey bars.

“Really little kids just don’t have the arm strength, until at least age 5 or 6, to handle the monkey bars,” he says. “They often will fall to the ground when attempting them.”

Byrum also recommends parents talk about boundaries – what kids can and can’t climb on, jump from and scale.

“Kids will be tempted to climb on the outside of spiral slides or on top of the swing beam,” he says. “Sometimes they also try to scale play structure railings. Talk to them about what they can and can’t do.”

This advice also goes for slides.

Byrum notes that perhaps the cardinal rule of playground safety is never to leave your young children unattended.

“Young children need their parents or another caregiver nearby for many reasons,” he says. “Some park play structures are not built for children under 4 or 5 years of age. If a young toddler climbs a high play structure, there is an opportunity for him or her to fall from a significant height.”

As for backyard play equipment, Byrum notes that Rainbow equipment is engineered with safety as a first priority.

“For example, all ladders and climbing walls are built at an incline, so if a child loses his or her footing, he or she won’t fall straight down,” he explains. “Likewise, scoop slides help ensure kids stay contained.”

U.S. News & World Report have released its rankings of the best children's hospitals and three Michigan pediatric hospitals have made the cut.
Read more
Indoors

Metro Detroit and the greater Ann Arbor area dish up delicious sliders perfect for the kids at these local slider hamburger restaurants.
Read more
At Home