Putting an End to ‘Crazy’ and ‘Psycho’ 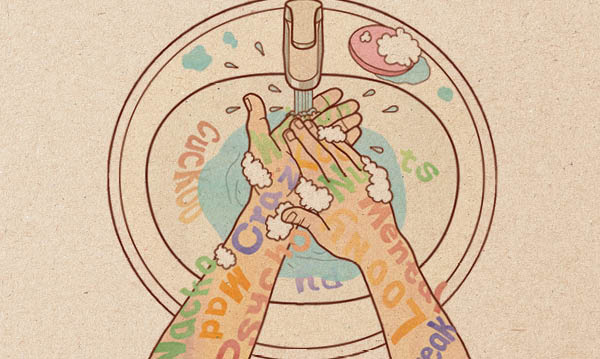 Sticks and stones can break my bones, but words will never hurt me” is an old childhood mantra, designed to help children overcome hurtful comments. But it’s not entirely true, is it? Words can hurt. And some words like “crazy” or “psycho” are not only used to mock or make light of mental illness; they can contribute to the larger stigma surrounding those with mental health challenges – a stigma that experts say keeps many people from getting help.

“There are a whole lot of children because of the stigma who don’t get diagnosed at all,” says David Rosenberg, M.D., chair of the department of psychiatry at Wayne State University and the Detroit Medical Center. “There’s a fear of getting a diagnosis, getting a label, getting stigma.”

But there’s a bright side, and parents everywhere can help: “Knowledge will heal,” Rosenberg says. “It defeats ignorance and stigma every time.”

To start, kids can be taught about invisible disabilities and that a disorder of the brain is no different than one that affects any other part of the body. They should know that the differences they might notice in someone’s behaviors or moods go along with that.

“I think even young children can begin to understand that concept,” he says.

It’s a conversation their own family has had, adds his wife Jennifer Chiriboga, Ph.D., a pediatric psychologist and nationally certified school psychologist.

Parents can explain something like, “This person has an illness that’s affecting their brain and then their behavior,” she says. “They may understand it right away, they may not. But as parents, you’re setting the foundation for the beginning of understanding.”

Moms and dads can help their children learn to use appropriate words by modeling respectful language and teaching them to avoid words that may be hurtful. It’s a topic parents can discuss with their kids from an early age, Chiriboga says.

“I think it starts, in our experience, in preschool or kindergarten,” she says. “Maybe those words don’t come up, but the word ‘hate,’ the word ‘stupid’ – our kids are taught in school that those aren’t preferable words to use, and that they carry a lot of weight.”

Context is also important. “Crazy,” for example, has multiple meanings and is used in countless non-offensive instances. A child might say he’s crazy about baseball or that a game had a crazy ending, Chiriboga points out.

“I don’t think it’s the use of them, but it’s the context that really is decisive and the intention of the word,” she says. “I think this is all part of their cognitive and social development – learning what may be offensive, what may be taken the wrong way. Learning manners, how to become a friend.”

When words are used too lightly, it also can minimize diagnoses. Rosenberg says experts have even considered changing the names of diagnoses because of it.

“These questions have come up about the concepts of depression and anxiety,” he says. “To the general public they mean many different things. ‘I’m depressed that I bombed an exam’ is completely different than someone who is clinically depressed.”

For that reason, Rosenberg says, “mental illness in children in particular is both underdiagnosed and overdiagnosed.”

Overall, the doctors say the goal is to be more thoughtful in the words we choose and think of the consequences and impact of those words.

Even parents will slip up sometimes and that’s OK, Chiriboga says, and often a teachable moment for the family.

“We talk about it, and we catch each other,” she says. “We can learn from our mistakes … It’s OK for parents to say something like, ‘I could have said that better.'”