Would you know what to do if your child experienced a seizure? Learn all about identifying a seizure, how to act if your child has one, and how they can be treated. 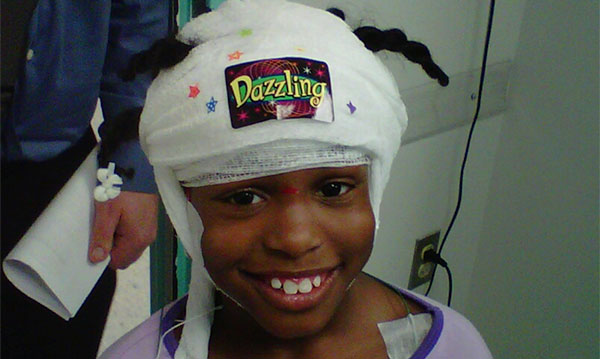 The Johnson family was heading to church in 2010 when something unexpected happened. Alyse, at the time 5 years old, was having a seizure.

“She was a totally healthy child. That was our first experience,” mom Toya Johnson of Westland recalls.

When the emergency medical service arrived and took Alyse to the local hospital, the doctors there suggested the family head to Children’s Hospital of Michigan in Detroit. But things were different for Alyse.

“From that day forward, it was a domino effect of side effects,” Johnson says, thinking back on the time. Despite being on several antiepileptic medications, the seizures continued day and night. Alyse eventually started losing her ability to walk and talk. She was regressing, and her personality changed. Eventually put on steroids, too, Alyse’s looks began to change. “I didn’t even recognize my own baby.”

Alyse’s condition was unknown, but Johnson kept faith. A few years in, Dr. Mitchel Williams, a neurologist at CHM, entered the picture. “He was like a godsend,” she says. Williams, who specializes in the emerging field of neuroimmunology and its connection to epilepsy, had a treatment to try, suspecting an autoimmune disorder was the cause of Alyse’s condition. He started Alyse on intravenous immunoglobulin, or IVIG, which delivered antibodies directly into Alyse’s veins.

After two months of treatments, progress was evident. “She was having seizures 85 percent of the day, (and) dropped down to 10 percent,” Johnson says.

Today, Alyse, now 11 years old, is seizure free. She continues treatments at CHM (each takes about 8 hours), but she’s been taken off steroids for the first time in five years, and mom says slowly she’ll be taken off other medications.

“It’s just been like a snowball effect of good new when it comes to Alyse,” Johnson says. Now, back in school, her teachers report progress.

“She’s not all the way back to Alyse, but I praise God for the milestones. We are seeing progression.”

That day Alyse was transferred to CHM changed everything – and for that, her mom is thankful.

“The nursing staff, the doctors – they are just so caring and hopeful. They give you hope,” she says, adding, “That’s a part of your healing process – just having hope. They are just phenomenal.”

“Before you look at your situation and think the worst, count your blessings. I do that. Things could have been a whole lot worse.”