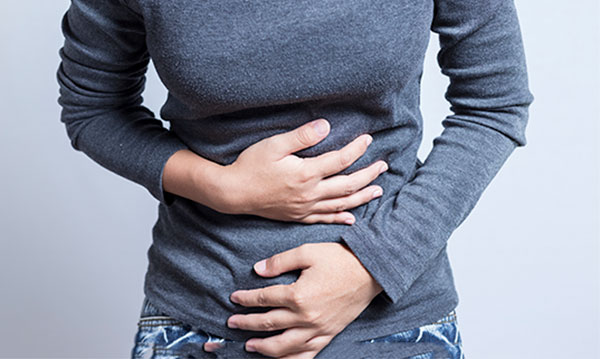 Tummy aches are a common complaint among kids. But much like “I don’t feel good,” it can be tough to pinpoint the cause of your child’s discomfort.

So how can you tell if stomach pain or potty problems go beyond a mild virus or something your child ate? When should you be concerned?

These questions are frequently asked of Dr. Kristen Cares, M.D., a pediatric gastroenterologist at the Children’s Hospital of Michigan. Sometimes a sensitive stomach is to blame. Other times, irritable bowel syndrome is the culprit.

While the exact prevalence of irritable bowel syndrome, or IBS, among kids is unknown, one study found it occurs in as many as 14 percent of high school students and six percent of middle school students in North America, according to the National Institutes of Health.

“IBS is quite common in teenagers,” Dr. Cares says. “That’s usually when we detect it or when they start noticing the changes.”

Irritable bowel syndrome is a disorder that can cause chronic abdominal pain, constipation or diarrhea and other gastrointestinal concerns such as bloating, gassiness, nausea and mucous in the stool. Pain may occur with defecation and there is often a change in stool frequency or appearance.

“A lot of kids don’t have it on a daily basis; it’s very intermittent,” says Dr. Cares, adding that children may have diarrhea-predominant or constipation-predominant IBS. “Or it can be mixed where it varies, diarrhea one day and then revert to constipation the next day and they never have normal-consistency stool.”

As for the pain children feel with IBS, it’s usually generalized and may be felt all over the abdomen, Dr. Cares says. The pain is sometimes relieved by a bowel movement.

“The abdominal pain is chronic,” she says. “Usually when these kids come to see me they’ve been having it for months. For a lot of kids … a common symptom of IBS is abdominal pain in morning hours before school. They feel the cramping and usually associated with stools.”

Since these symptoms can also point to other problems, IBS is usually diagnosed after first ruling out other causes. “There is no marker to screen for IBS. Because of this, a committee developed diagnostic criteria to help confirm if a child has IBS. Part of the criteria include that a child must have symptoms at least once a week over the past three months associated with a change in stool pattern,” Dr. Cares says.

Before they discover the problem and begin treatment, kids with irritable bowel syndrome sometimes have trouble going about their daily schedules because of their symptoms.

“The severity is sometimes just mild and they can go on through the day or it can be really severe and debilitating,” Dr. Cares explains. “I have some kids who miss school because the pain is so severe.”

Certain foods can trigger symptoms and stress is also part of the equation for people with IBS.

“If it’s a stressful day or they’re anxious about something, that can trigger it,” she says. “It can be a vicious cycle. They’re having the symptoms and they think, ‘Oh my gosh, is there something wrong with me?’ That exacerbates more stress and anxiety.”

Although IBS is a common cause of gastrointestinal symptoms, parents should know that certain symptoms are a red flag for something more serious.

“I would tell parents if the child is waking up in the middle of the night, that’s a red flag that something else outside of IBS is happening,” Dr. Cares says. “Another red flag is significant weight loss – if they’re losing more than 10 pounds.”

Rectal bleeding outside of constipation, especially blood that is dark or maroon in color or if blood is mixed in the stool, is also a cause for concern.

“If your child displays any of these red flags, it is a good idea to inform your primary care physician who may refer you to a pediatric gastroenterologist.”

Though the definitive cause of IBS is not yet known, it is thought that multiple factors play a role, including a genetic predisposition – a possibility Dr. Cares has observed in her own practice.

“Usually there’s a family member with IBS,” she says.

That can be an important benefit, since parents familiar with the disorder can help their children manage it, including deciphering potential triggers that exacerbate the symptoms.

“Usually what I tell parents is that children may continue to suffer from IBS until adulthood, but the severity is not as bad, as they determine what triggers their disease,” Dr. Cares says. “So as they get older, they learn what exacerbates their symptoms and they learn how to avoid those triggers.”

Parents should also know that having IBS diagnosed in a young child doesn’t mean it will be more serious or have a worse prognosis than if diagnosed during adulthood.

“Once we’ve confirmed the diagnosis, we do talk with the families and try to reassure them that this is definitely controllable. They’ll figure out their triggers and they’ll be able to live normal lives,” Dr. Cares says. “There’s a lot of reassurance that’s needed in these patients and also education. That’s where I start first.”