Signs Of Suicide Every Parent Should Know 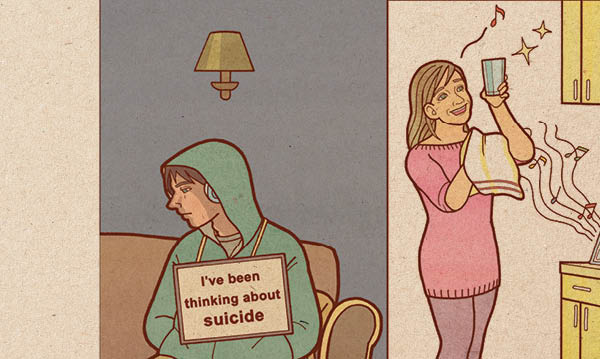 The thought of a child committing suicide is too painful to fathom for a parent. Sadly, though, it’s a tragic reality for a shocking number of families across the United States.

According to the Centers for Disease Control and Prevention, suicide is the third leading cause of death among youth ages 10-24 and you’re not alone if you think it could never happen to your child, but the signs might not be what you’d expect. Being aware is key – even for families who don’t have a history of depression or a reason to think their child is struggling.

If you’re curious about the signs, or just want to be vigilant about caring for your child’s mental health, consider these tips from Dr. Carnigee Truesdale-Howard, a licensed pediatric psychologist formerly with Beaumont Health in Royal Oak.

“I think that it’s important for parents to be aware and know the warning signs because it is preventable,” she says of suicide.

Warning signs for suicide include a change in the child or teen’s mood, behavior or interests, Truesdale-Howard says. A child who usually loves playing basketball but now wants to stay inside all day, for example, could be a red flag.

“They no longer seem interested in the things they normally looked forward to,” she says.

The child might also isolate himself, withdraw from spending time with family and friends or express feelings of hopelessness or helplessness.

Risk-taking behaviors are another warning sign for suicide, Truesdale-Howard adds.

While all parents should be aware of suicide warning signs, they should know that certain youth are at increased risk.

“Gender-wise, males are going to be more likely to complete a suicide compared to females. Males are also more likely to use more aggressive or violent means,” she says.

Caucasians are more likely to commit suicide than other races.

Other risk factors include a family history of suicide and having a diagnosable mental illness.

Being a victim of bullying has also been found to be a risk factor, she says. Parents should watch for signs that their child is being bullied and check in frequently with people closest to the child.

“Checking in with their friends, checking in with teachers and coaches. How is ‘so and so’ getting along with everybody? What do you notice in the classroom?” Truesdale-Howard suggests asking. “I think talking with those others that have contact with your child is a good way. Sometimes parents are able to observe also. If friends come over, you’re able to stand back a little bit and observe the interactions.”

Talking about a child’s feelings when they’re young usually comes naturally. Don’t stop those important inquiries as your kids get older.

“We do a lot of that during infancy, we talk about bonding … that should continue,” Truesdale-Howard says. “I think when you start at a young age of having that good parent-child interaction and relationship, it makes sense to be able to continue that. You’ve already set the foundation.”

While assessing for mental health issues and suicide risk should happen during your child’s well visits, parents shouldn’t wait for the doctor to bring it up.

“I think parents can help out with that by not just leaving it to the physician to have that conversation but talking about that as well,” Truesdale-Howard says. “I think it can really start by simply talking to your kids about their feelings and their thoughts … ‘What do you think about that? How do you feel about that?'”

Normalizing these conversations will go a long way, she says.

“So then it doesn’t seem out of the blue when your child is in their room and they won’t come out, so that it doesn’t seem weird like ‘Why are you asking about how I feel?’ It’s just part of the norm,” Truesdale-Howard says.

Don’t hesitate to take action if you have concerns about your child’s mental health.

“I think when you look at everything in totality – warning signs, risk factors – the more of these that you have, the more you should be concerned,” she says.

But how can you tell if mood swings are normal teen angst or a sign of something more serious? Consider the frequency, Truesdale-Howard recommends, and trust your instincts.

“All adolescents and preadolescents go through being irritable and kind of adjusting to middle school and peer challenges and things, but I think also look at how that teenager or child is dealing with it,” she says. “How well are they able to come back to the person that you kind of recognize? Have they been displaying this irritable mood consistently for days or weeks? Am I able to see a break or interruption?”

Depression and other mental illnesses often associated with suicide are very treatable, Truesdale-Howard says. If you have any concerns, contact a mental health professional for an evaluation. Your child’s primary care physician should be able to make a referral.

In the meantime, parents should also take precautions such as removing firearms and other means of suicide from the home.

“There’s been data to suggest that simply just having firearms in the house increases risk or chance for suicide attempts,” she says. “But I think there’s been other data that has kind of expanded on that and said if that’s going to be the case, then locking up the firearm and the ammunition separately can reduce the risk.”

Beyond that, it’s a matter of paying careful attention to your child’s mental health – even when they’re shutting you out. Social media and other online communications should be monitored.

“This isn’t anything to ignore. It can happen to anybody. No one is exempt,” Truesdale-Howard says. “Educate yourself, stay involved and keep the dialogue open with your child and teenager.”

This post is brought to you by the Flinn Foundation.

Take your kids to see and sing along with their favorite Disney movies at Lighthouse ArtSpace Detroit.
Read more
Outdoors