Why Sleeping Bear Dunes Is a Must-Do for Fall Color

Your family loves it during the summer, but why limit yourself? Find time to take in the splendor of fall at Sleeping Bear Dunes National Lakeshore in Traverse City.

When the viewers of Good Morning America named Sleeping Bear Dunes National Lakeshore the “Most Beautiful Place in America,” the respected TV show called it a “hidden gem” and “one of the nation’s best-kept secrets.”

But Michiganders have long appreciated the entire Traverse City area as one of the state’s most treasured regions. And experiencing it in the fall is about as good as it gets — unparalleled natural beauty along with sophisticated options for lodging, dining and shopping.

After all, there aren’t a lot of spots where you can visit a Great Lake, take an invigorating hike, check out an award-winning winery, tour a charming family farm, get lost in a mammoth corn maze, pick apples in a scenic orchard or try your luck at a Vegas-style casino, all in one day.

“Fall is orange and crimson, golden light falling on weathered red barns,” writes novelist Maggie Shipstead about the area in a recent issue of Conde Nast Traveler, the glossy magazine that usually pays attention to the world’s most glamorous sites like Paris and Monaco.

Headed north this autumn? Here are some don’t-miss highlights of the Traverse City area:

“Sleeping Bear Dunes National Lakeshore gets a lot of attention during the summer months, but to step foot in the park in the fall is a different, magical experience. To walk or bike the miles of paved trails under a canopy of crimson and gold trees is stunning. In the fall its full glory is on magnificent display,” says Mike Kent, public relations manager at Traverse City Tourism.

The area’s crown jewel is a 64-mile curve of powdery beaches, thick forests and the eponymous dunes that soar up to 460 feet and cover some 4 square miles.

The climb up the dunes is almost a rite of passage, but keep in mind that it’s very steep and plodding through all that sand can be exhausting and disorienting. Think twice if you picture yourself carrying a toddler — there’s plenty for little ones to enjoy at the base of the dune. The views are magnificent, however, and it’s a real blast to scamper back down.

A lower-impact way to experience the park is along the paved Sleeping Bear Heritage Trail, a non-motorized pathway that runs nearly 22 miles. It’s fully accessible and its hard surface is designed for walkers, runners, skiers, people on bicycles or wheelchairs and babies in strollers.

Merrith Baughman, director of interpretation and visitor services at Sleeping Bear Dunes, offers an insider’s tip for those cruising the iconic drive. “A lot of people go to the Sleeping Bear Dunes Overlook to see Lake Michigan, but they actually miss the best fall color view at the next one, called the North Bar Lake Overlook,” she says. “You look to the south and see North Bar Lake, the village of Empire and the Empire Cliffs. It’s beautiful, and it has a little picnic area and bathrooms but not many people use it.”

For especially breathtaking vistas, Baughman also recommends a half-mile hike up the Bay View Trail in the park’s rural Port Oneida district. “There’s a little steep section but it’s not too long, and it’s in the forest so it’s protected from the winds. A lot of local folks use that trail,” she says. 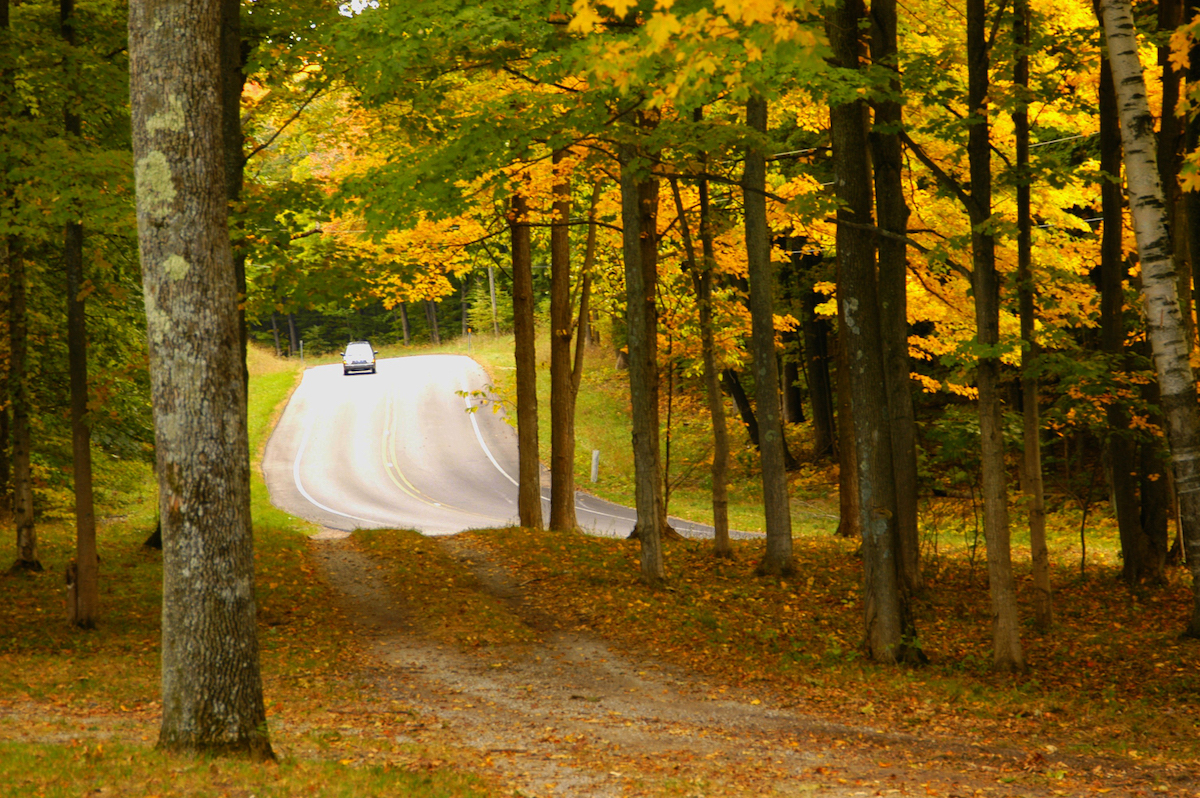 Finally, Baughman reminds visitors not to forget about the beach, especially on those Indian Summer days. “The lake stays warm,” she says, “so you can swim into October.”

Up, up and away at Crystal Mountain

Another glorious way to soak up the splendor of autumn is via a ski chairlift ride at Crystal Mountain, the four-seasons resort with skiing, golf, and a spa and wellness center. The lift is open through October 30 for those over age 3, and kids ages 3-8 ride free with a paying adult.

There’s all sorts of things to do (and eat and drink) at Jacob’s Farm, a 40-acre site complete with pick-your-own fruit orchards (Zestar and Honeycrisp apples are in season) and an elaborate corn maze that changes each year. There’s also occasional live music and beginner-friendly yoga classes.

Raise a toast to local concoctions

If you’re making a parents’ getaway, enjoy a visit to a winery or two. Thanks to its location on the 45th parallel (the same as famed winemakers in Italy and France), the Traverse City area has some 40 wineries — most of which are picture-postcard charming — as well as a dozen microbreweries. Come November 12-19 for Traverse City Beer Week. There’s even a handful of whiskey and vodka distilleries and apple cideries. Cheers!

Learn more about the area at traversecity.com, and grab a free Kids’ Guide to the region.

Baby and Toddler Events in Metro Detroit and Ann Arbor

Looking for something fun to do with your baby or toddler this weekend? Check out these upcoming events in Macomb, Oakland, Wayne and Washtenaw counties.
Read more
Advice

Find out what baby names parents loved in 2020.
Read more