Maple sugar season is upon us, so we share some sweet facts about "the first crop of the year," with the help of an expert from Huron-Clinton Metroparks. 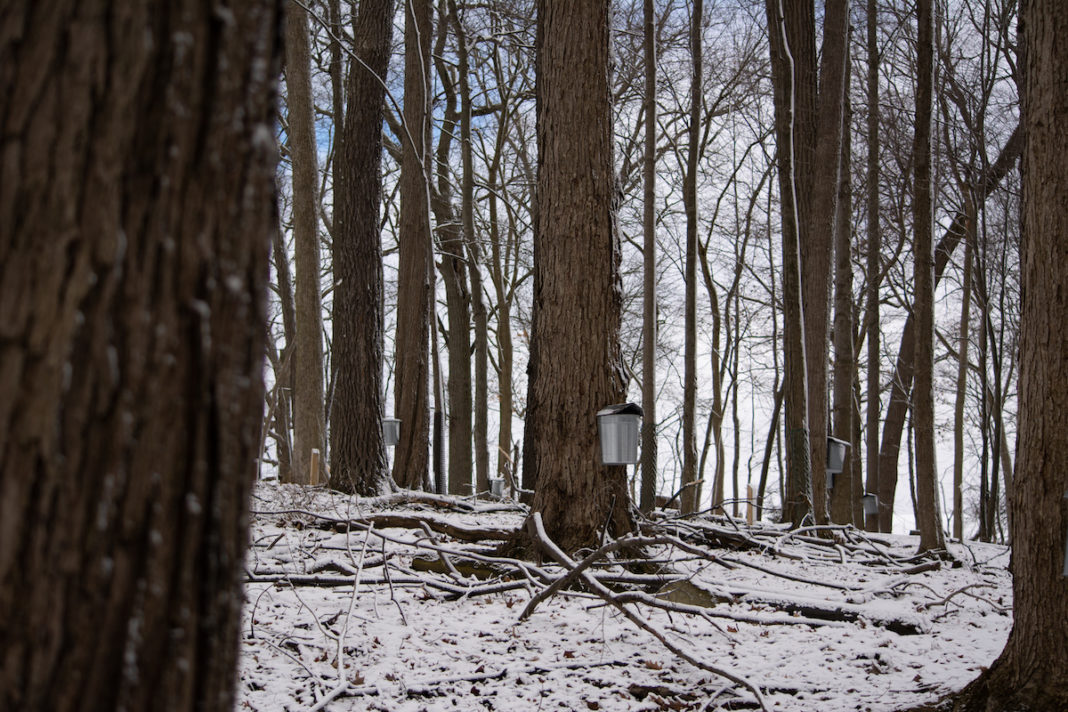 If you live in any neighborhood in southeast Michigan, you probably have a maple tree somewhere close by. It might even be in your own backyard. If so, here’s something you should know: late winter is prime maple sugaring season, according to Patrick Bigelow, supervising interpreter with Huron-Clinton Metroparks.

“At this time of year, when the temperature dips below freezing at night but is above freezing during the day, this creates pressure which moves sap from the roots, where it is stored over the winter, up through the trunk to where the leaves form,” Bigelow says.

He grew up maple sugaring — or tapping maple trees and processing the sap to form lusciously sweet maple syrup. “It’s a centuries-old process that was developed by Native Americans. They observed red squirrels and other animals nip the buds from the trees and drink the sap. Early colonists were taught by Native Americans how to create syrup from the sap,” he says.

At Huron-Clinton Metroparks’ Kensington Metropark Farm Center in Milford, Bigelow and his colleagues tap as many as 200 sugar maples and red maples. “Any tree in the maple family can be tapped,” he says. “Silver maples, black maples, even imported varieties, like Norway maples.” Trees should be at least 40 years old and 10 to 12 inches in diameter and healthy in order to be tapped, he says. The short maple sugaring season lasts just 30 to 45 days, but could be much shorter at only 20 days, depending on the weather.

Michigan is one of the few places in the world with the right conditions for creating maple syrup. “Quebec is the world’s leading producer of maple syrup, then Vermont. Michigan is usually around fifth for production,” Bigelow says.

Many people have never tasted pure maple syrup, which is made when the collected sap — thin and watery and only 2% sugar — has been concentrated through a process of heating and reducing.

“When it’s finished, maple syrup is 66% sugar, and it takes 39 gallons of sap water to be burned off to create one gallon of maple syrup,” Bigelow explains, adding that sap has the highest concentration of sugar at the beginning of the season.

Attend a program at your Metropark

Huron-Clinton Metroparks is the place to be during maple sugaring season because interpreters have created a variety of in-person and self-guided programs for families to learn all about maple syrup.

Families can take walks through the woods — through a self-guided program or led by an expert from the Metropark — to discover how to identify a maple tree even without its leaves and learn the sweet history of maple sugaring. At Hudson Mills Metropark, families can even grab a pre-ordered ready-to-go feast of pancakes, sausages and pure maple syrup.

“Our programs teach people the basics of what they need to know if they are thinking about doing sugaring at home,” Bigelow says. “We learn what maple trees look like from their branches and bark and we set off into the woods to see a demonstration of tapping. People can ask all the questions they want about maple sugaring.”

Each program varies just a little bit, but they’re all sweet as can be.

“Each is a fantastic program to get families out into the woods and into nature to take an active part in learning what we consider to be the first crop of the year,” Bigelow says. “Maple sugaring is an art that has been passed down through the generations and if you have a few maple trees, you have the most important component. If you don’t, you can start talking to your neighbors. In some cities, with permission, it’s possible to tap in city parks and along roads. There are options.”

Brought to you by Aim High School
Read more
Attractions