The Big Benefits of Nature on Mental Health

A local expert weighs in on how spending time outdoors improves mental health. 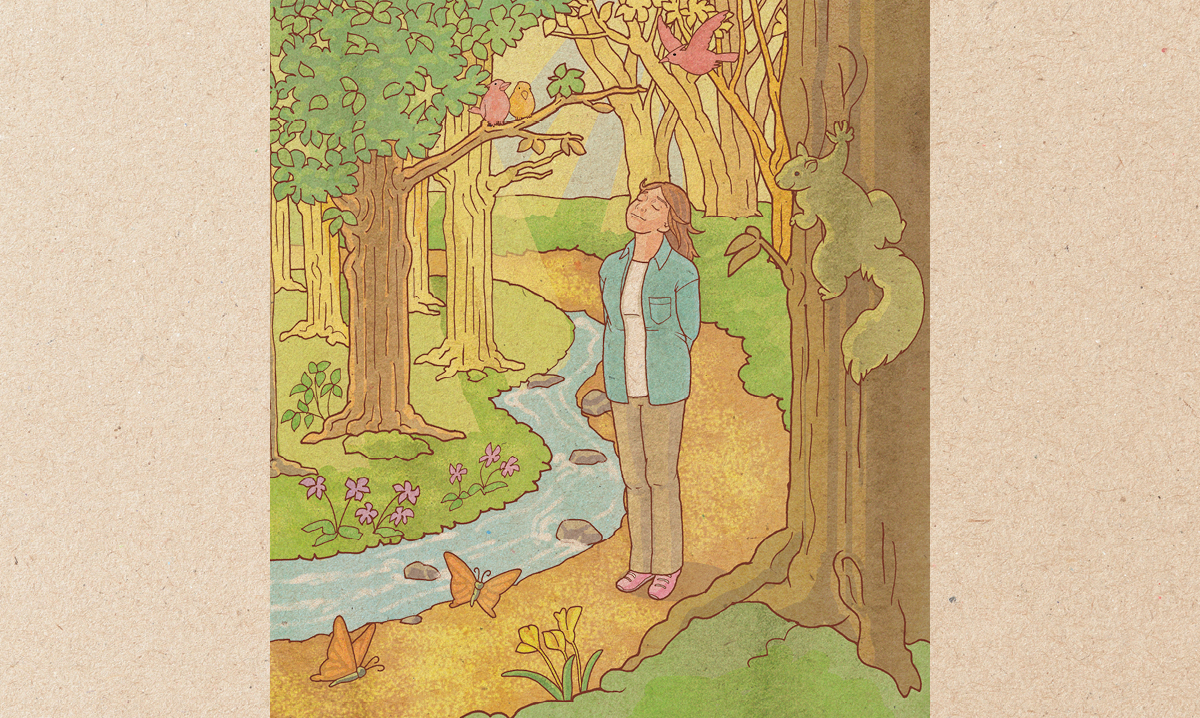 The cleansing effect of the great outdoors is more than just hyperbole.

As it turns out, a walk in the woods, the feeling of sand between your toes or swaying in a hammock can actually have proven mental health benefits.

“A whole range of studies and a lot of different disciplines have supported this same assertion,” says Warber, who was involved in a 2014 study that found group nature walks can lead to significantly lower rates of depression and stress.

People often underestimate just how good being in nature can make them feel, which was emphasized in a recent study in Canada that compared college students who walked across campus through a natural setting versus those who took an underground route.

“There was a huge difference between them,” Warber says. “The people who walked in nature felt better, they were happier, they felt better about themselves emotionally.”

While nature’s positive effect on mental health is gaining traction in the U.S., other cultures already embrace it. A recent article in Time shared the benefits of “forest bathing,” a Japanese practice that involves simply being in nature and connecting with it by using all the senses, and Forbes reported in July that new research links forest bathing with significantly reduced risks for various chronic illnesses.

“The research about forest bathing is very compelling,” Warber says, adding that a certification course is now being offered in the U.S. that will make “forest therapy guides” available to help people connect with nature. “It’s a really exciting thing. Michigan is an amazing nature wonderland, and so increasing access to that by making it feel more safe and comfortable to people that maybe aren’t very nature-savvy, that can really help them to realize the benefits.”

Knowing about the mental health benefits of nature is especially important for parents and children, since recess opportunities are increasingly cut short at schools and kids spend less time outdoors.

“It turns out when you look at kids in schools where they have outdoor free play, those kids are better at problem-solving,” she says. “Nature can provide a safe place for creative problem-solving type of play for children, and that seems to be extremely important to their mental development.”

So just how much of the great outdoors is needed to make an impact on your mental health? It’s hard to say, Warber says, but incorporating nature into your regular routine is likely to help.

Keep in mind, though, that a “dose” of nature won’t necessarily replace psychological treatments like therapy or medication.

“It doesn’t mean that that’s going to solve all your mental health problems, and there’s certainly a spectrum of care for people,” she says. “Do we still need counseling and things like that? Absolutely. And in fact, what we know about mental health is it’s the combination of counseling and medications that does the most for most people. If you want to get the best results, it’s probably going to be a combination of things.”

The good news is that once you start spending time in nature, you’re likely to crave more.

“It tends to set up a situation where you want to come back because it’s a pleasant experience,” Warber adds. “I don’t think you can have too much nature. You can get too much of some of the elements, but in general I think you’re not going to harm yourself by spending more time in nature.”

Families interested in the mental health benefits of nature for their kids should lead by example. If you aren’t the outdoorsy type, seek out scouting opportunities or ask family and friends to take the kids on nature outings. Beyond that, avoid common barriers to getting outdoors by being prepared with sunscreen, bug spray and weather-appropriate attire.

Understanding how nature can improve your well-being is often a reminder of why preserving it is so important, Warber points out. “If nature is good for us, what are we doing to preserve it in our local spaces?” she says. “Lots of different groups are doing that, but it’s also a time in our civilization where nature spaces are being turned into commercial enterprises or housing at a fairly alarming rate. So that suggests that community action to preserve, create more and to take care of natural spaces is really important for us so that we can continue to have these positive benefits from nature.”