The Happier Hysterectomy: What EVERY Woman Should Know 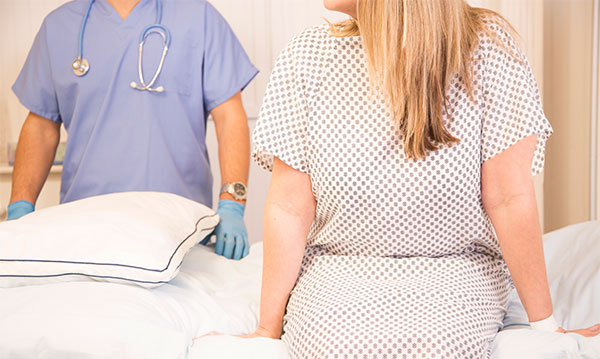 Getting a hysterectomy isn’t a step any woman takes lightly.

The removal of the uterus is a major surgery often considered after years of significant pain, a cancer diagnosis or other reasons. About 600,000 hysterectomies are performed each year in the United States.

“They are one of the most commonly performed major gynecologic surgeries,” says Dr. Ethan Goldstein, an OB-GYN with the DMC Medical Group in Detroit.

Though it means losing the ability to get pregnant, a hysterectomy is typically used to treat serious health problems such as uterine fibroids – which are benign growths inside the uterus – cancer, uterine prolapse or chronic pain.

“The effect is to end or stop whatever symptom has led the patient to that decision,” Dr. Goldstein explains, pointing out that other surgical and medical remedies are often tried first. “Whether it be abnormal or heavy bleeding, pelvic pain, endometriosis, uterine fibroids … alleviating whatever symptoms we’re discussing is the reason we’re doing it.”

Despite how common the procedure is, many women are unsure of what a hysterectomy really involves.

“Patients get confused all the time with the different types of hysterectomy,” he says. “Patients hear that word and they think they’re going to be without hormones or lose their ovaries.”

Of course, that’s not always the case. In its simplest form, a hysterectomy is the removal of the uterus. Depending on the patient’s individual needs, removing the ovaries or fallopian tubes may also be recommended.

“A lot of nomenclature misunderstanding has been passed down through the years,” Dr. Goldstein says. “What I like to do in my practice is use simple diagrams to show patients exactly what we’re talking about.”

It’s important for women to know that not all hysterectomies are created equally. In fact, the type you get can make a major difference in your experience and recovery time – yet many people aren’t aware of the options.

“The most invasive is called a total abdominal hysterectomy,” involving an incision across the lower belly where a cesarean section would be. “Those patients spend three to four days in the hospital and have a much lengthier recovery.”

“There’s no scarring whatsoever, it’s all done through the vagina,” he says. “That’s really great for women who have smaller- to normal-size uteruses and who maybe haven’t had a lot of other pelvic surgery.”

“Robotic hysterectomy is simply a fancy laparoscopic hysterectomy using a da Vinci robot that we’ve had now since 2005,” he says. “The da Vinci allows surgeons to do more complicated and difficult hysterectomies easier.”

The instruments move like the human hand, allowing macro movements of the physician’s hand to become micro movements. This facilitates more complicated dissection and intricate work in the pelvis, says Dr. Goldstein, who leads the minimally invasive surgery program at Huron Valley-Sinai Hospital and has trained many other doctors on the method.

“It’s expanded the opportunity for patients with more complicated conditions to have a laparoscopic approach,” he says.

That progress is critical, since this type of hysterectomy involves less blood loss, less risk of infection and has a decreased risk of injury and negative outcomes. More patients become candidates for the procedure and they can enjoy a faster recovery.

“Most of my patients actually go home the same day or the next morning. They’re not even in the hospital for 24 hours, usually,” Dr. Goldstein says. “It’s been shown to be a much better approach for patients than having an open surgery.”

And for women who need a hysterectomy – often age 35 or older with a busy family life – the difference in recovery time is crucial.

“That’s an easier option to discuss as opposed to telling someone with three young kids and a busy lifestyle” that they’ll be in the hospital for days, he says. “You’ll be back to your life, back to driving in a week, back to exercise in three to four weeks. It’s a conversation that isn’t as hard to have.”

Women who believe they may need a hysterectomy should talk through the options with their OB-GYN and be prepared to seek out a new provider if they want a minimally invasive procedure that isn’t offered.

“I think it’s important, especially in this day and age of technology and resources, that everybody has the ability to do some of their own research and to ask the right questions,” Dr. Goldstein points out. And “if her provider does not feel comfortable performing minimally invasive hysterectomy, that she seek out one that does.”

Looking for a doctor who puts the “care” in health care? Find one at DMC Medical Group where you can book appointments online in minutes. Or call 1-888-300-DOCS.