The Importance of Early Intervention for Mental Health Concerns

Your child's well visits should include a physical and mental check-up. Find out why it's so crucial. 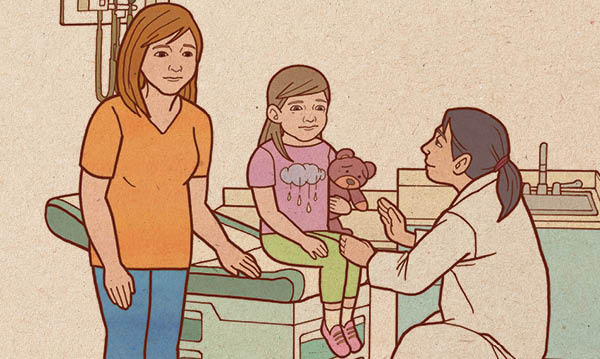 When you have young kids, you start to know the drill when it comes to their annual check-ups.

There’s the weight and height check, the usual questions about eating habits and maybe even a vision screening. It’s a chance to talk with your pediatrician about how your child is growing, discuss concerns – and dry the inevitable tears after those dreaded pokes.

But did you know that your little one’s mental health should be checked just as thoroughly?

“Most physicians want all aspects of their patients’ lives to be in balance,” says Dr. Lynn Smitherman, director of the pediatric residency program at Children’s Hospital of Michigan. “Sometimes (kids) can be fine physically, but if there’s emotional distress or anxiety, that is preventing the entire body from really flourishing and meeting its full potential.”

Part of the routine

Although it’s not always as obvious, mental health screenings usually start from the very beginning with a developmental assessment at 2 months old. They continue with each well visit through various checklists and questionnaires that the parents – and eventually the child – can answer.

Starting between ages 10 and 12, children will also be screened for depression, bullying, anxiety and symptoms of inattention.

“If any of those screens comes out with a positive finding, then we go ahead and make the referral to a mental health professional,” Smitherman says. “We try to keep the families, the parents involved as much as possible so the care is collaborative.”

This approach makes mental health screening simply a matter of routine. “By doing them routinely, we’re able to pick up some subtle changes that might otherwise be overlooked.” Smitherman says. And if concerns are found, “the sooner the diagnosis is made, the better.”

Changes in personality, behavior or mood can indicate your child is struggling. Never ignore these, Smitherman says.

“A parent might not think that’s important to bring up. Just as if it’s a cold that’s lingering too long or you notice a sore that’s just not healing the way you think it should be, any change in a child’s mood or personality or development should be brought up just to be investigated,” she says. “It’s always better to be safe than sorry.”

You should feel comfortable discussing mental health worries with your child’s pediatrician.

“Parents don’t have to wait for the next well visit. As soon as they think there’s a concern, it’s still OK to go ahead and schedule an appointment,” she says. “It could be that it is nothing or it’s just something that needs some more exploration.”

Studies show early intervention is critical for mental health concerns. But according to the National Institute of Mental Health, there’s an average delay of eight to 10 years between the onset of symptoms and when intervention begins.

Mental health guidelines from the American Academy of Pediatrics came out about 15 years ago, Smitherman says, so all pediatricians should be on board with frequent screenings at this point.

“The pediatrician is great as far as assisting the families with looking at all the options,” she says. “The earlier you do it, the primary care physician is usually involved and there’s better collaboration between the mental health providers and the pediatrician early on than if the person goes into crisis.”

Having a pediatrician you feel comfortable with and who your child will be willing to talk to is key. As your child gets older, he’ll start to take the lead in conversations with the doctor – an important aspect when it comes to discussing topics like mental health.

“I think they need that opportunity to do that, and I think eventually the kids do appreciate it,” Smitherman says, pointing out that some of her teenage patients have called on her to discuss issues. “To me as a pediatrician, that’s very fulfilling to know that I’ve been able to establish that relationship with my patients.”

Fortunately, awareness has increased over the years about mental health issues and the importance of early intervention.

“There is an underlying stigma, (but) I think it’s getting better,” Smitherman says. “I think we’re recognizing things more now, such as ADHD and some of those other conditions. They’re not as rare as we thought they were.”

But harmful misunderstandings and false assumptions do persist.

“We really need to realize that no child is acting out because they want to. Nobody’s behavior is like this on purpose,” says Smitherman, who wants parents to know help is available and effective. “With appropriate treatment, most people with a mental health condition can flourish and do well.”