Discover the Benefits of a Michigan Science Center Membership

Want a fun and easy way to foster an interest in science in your kids? Make going to the Michigan Science Center a regular family activity. Find out how a MiSci membership pays off – in cost and benefits. 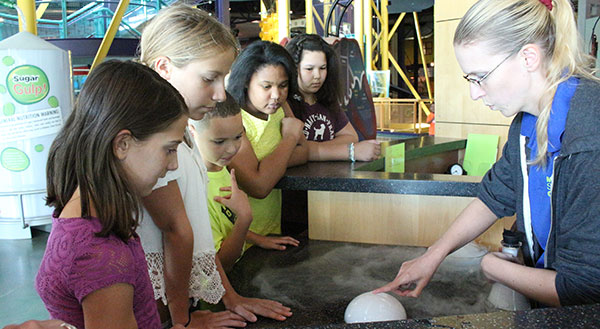 One of the beautiful things about living in a big city like Detroit is that there are lots of wonderful cultural and entertainment venues to visit. We have major league sports, touring Broadway shows, concerts … the list goes on and on. Did you know that for less than the cost of a family trip to a Tigers game, or a date-night show, you can get an entire year of mind-blowing, creative, educational fun?

It’s true: A family membership to the Michigan Science Center costs $75 for one year and gets you admission to hands-on exhibits, live stage shows and special member events for two adults and all children living at the same address. After the equivalent of a visit and a half, you’ve already covered the cost of what you would have paid in admission for two adults and two kids.

Membership Manager Lynell Moore notes that members also benefit from MiSci’s participation in the Association of Science and Technology Centers Travel Passport Program. This means you can get discounted or free admission to science centers both in Michigan and worldwide, including popular spots like the Great Lakes Science Center in Cleveland and the Museum of Science and Industry and The Field Museum in Chicago.

Of course, there is plenty to do right here in Detroit at MiSci – with about a dozen shows on the daily schedule, it’s definitely more than you can see in a week. As members, you can peruse the museum at your own pace, instead of rushing to fit everything into one visit. If your kids get really interested in the space or engineering exhibits, they can explore as much as they like, since you can come back as often as you want, Moore says.

“There’s always something new here,” she says. “With MiSci’s interactive programs and shows such our ‘Ask the Expert’ series, Astronomy Week, or Sensory Friendly Day, you’ll never have the same experience twice.”

Simone Cato of Detroit purchased a MiSci membership shortly after the center opened in 2012. The investment more than pays for itself, because they go at least once a week. “It’s a cool hangout spot for my friends,” she says, and a place to gather with other families. Her kids love it too, she says; her 22-month-old can play in Kids Town, and the older kids love the motion exhibits on the lower level.

That’s one of the big benefits of membership, Moore says – families develop relationships with the MiSci staff and with the facility itself. It becomes a place where many childhood memories are formed.

“We inspire curious minds of all ages,” she says. “You’re never too young or too old to discover, learn and get engaged with science.”

Members get other perks too: discounts on camps and workshops, discounted or free admission to the Dassault Systèmes Planetarium and the Chrysler IMAX® Dome Theatre, and 10 percent off at the Explore Store and Cosmic Café. Members also get invitations to special member events, such as lectures by visiting scientists and previews of upcoming exhibits.

At heart, MiSci memberships make it easy and affordable to access that special blend of STEM education and family fun. “We are Michigan’s hub for STEM learning and fun,” Moore says.