The Most Common Mental Illnesses in Kids

Even young children can suffer from depression, anxiety and other mental health disorders. Here, parents can learn the sometimes surprising signs to look for and how to get help. 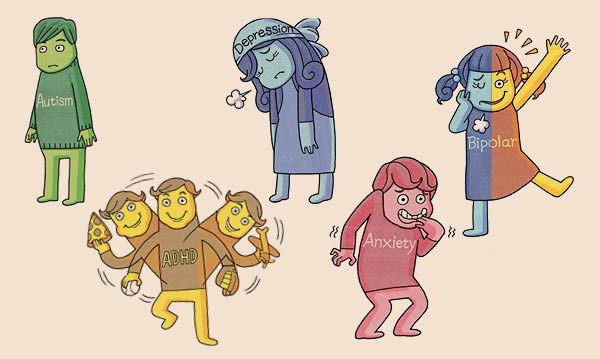 Parents can expect that tending to their child’s health might include playing nurse to skinned knees, throbbing ears or upset tummies. But more serious care isn’t easy to plan for, particularly when it comes to mental health.

The Centers for Disease Control and Prevention reports that about 13 percent of children ages 8 to 15 had a diagnosable mental disorder within the previous year. Despite the prevalence, the signs and symptoms children exhibit are often overlooked or misunderstood. They can even be ignored to avoid a label.

That mindset can make it more difficult to identify children who need support.

“One of the big things for me is for people to get to where they can say, ‘I think my son has depression’ or ‘I think maybe my daughter has autism’ as easily as they can say, ‘I’m worried Johnny might have a cold’ or ‘Susie has allergies,'” McIntyre says. “It’s not a reflection on someone’s parenting skill. It’s important for people to seek out that help.”

The CDC describes mental disorders among children as “serious changes in the ways children typically learn, behave or handle their emotions.” The most common mental health disorders seen in young children include attention-deficit/hyperactivity disorder and autism spectrum disorders, McIntyre says.

Autism is increasingly common, with the most recent data showing that it occurs in one in 68 U.S. children.

“Even early on with autism, there are early warning signs a doctor can look for,” McIntyre says. “It’s important to identify those as early as possible, so that you can get interventions and make sure that the kid has the best chance of maximum development.”

In older kids and teenagers

According to the National Alliance on Mental Illness, or NAMI, 20 percent of youth ages 13 to 18 live with a mental health condition. Anxiety disorders and major depression are among the most common mental health diagnoses in this age group, McIntyre says.

Parents should know that the childhood symptoms for depression and anxiety may appear differently than they’d expect.

With depression, for example, adults may exhibit sadness while children are more likely to express feelings of anger, she says.

Symptoms to watch for vary based on the child’s age and suspected disorder, but a general rule of thumb is to pay careful attention to any major changes in your child’s behavior. Whether it’s your infant who’s no longer babbling or your teen who’s suddenly withdrawing from previously-favored activities, these noticeable changes should be taken seriously.

“For any age, the No. 1 thing for the parents to notice is a major change,” McIntyre says. “Nobody expects parents or guardians to become therapists, but just knowing your kid and knowing when something’s different and raising the alarm.”

Other signs include: self-harm, risk-taking behaviors, sudden weight loss or gain, mood swings, trouble concentrating, racing heart and sudden feelings of being overwhelmed, intense worry that gets in the way of daily activities.

Even if the signs you’re noticing are less obvious, it’s best to err on the side of caution and share your concerns with your child’s pediatrician or a mental health professional, says Crystal Palmer, director of children’s initiatives at the Detroit Wayne Mental Health Authority.

“I would always encourage them to trust their gut,” she says.

Treatment can even be a matter of life or death. Suicide is the second-leading cause of death among ages 10 to 24, and 90 percent of those who died by suicide had an underlying mental illness. Untreated mental illness can also make intervention for general medical conditions less successful, McIntyre says.

Parents should know that a wide range of treatment options are available for mental disorders –and contrary to popular belief, not all require medication.

“There are a lot of evidence-based practices that can help focus on whatever the different needs are,” Palmer says. “If you think about the common cold, you treat it to get better – and it’s the same thing with mental illness. As long as you continue to treat it appropriately … you can be successful. Having a mental illness doesn’t have to hold you back.”

Parents who suspect an issue are encouraged to seek help for their child as early as possible. A mental disorder diagnosis isn’t a roadblock to a happy, successful life and individualized therapies are available to fit your child’s needs. Most of all, as McIntire says, parents should “believe in recovery.”