The Value of Arts Education 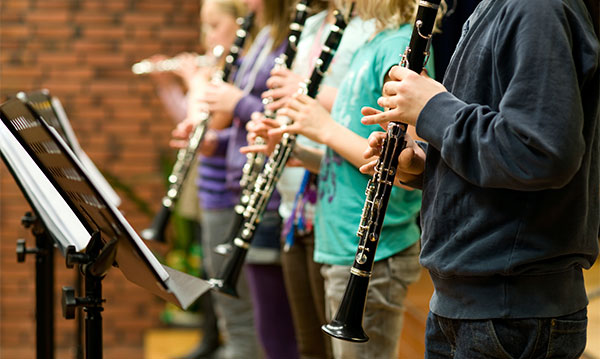 When children first start school, there is no shortage of chances to dance, sing, play pretend and make art. But as children get older, those opportunities drop away and sometimes disappear entirely.

That’s a sad thing, because the need to express oneself doesn’t stop in kindergarten. “Fine arts reach the heart and soul of a student,” says Jarie Ruddy, fine arts teacher at the lower school at The Roeper School. “Whether or not art is your particular gift, you can find your heart and soul through expressing in that way.”

Often, arts classes are reserved for students who are especially talented or passionate in that area – curriculum requirements mean that a science whiz who loves music, but perhaps is not particularly talented at it, is unlikely to have the room in his or her schedule to take a music class. At Roeper, arts are never off limits to any student. Ttari Hellmer, director of the Roeper Theatre Company, says they have a no-cut policy for middle school shows, so that more children can participate. She also works with the athletic department on scheduling, so students can do both a sport and a production.

“We don’t consider it an extra or a frill,” says Ruddy.

Roeper serves gifted children, who tend to think differently than other children their age in addition to their high intelligence. Arts education can help them express their unique view of the world, says Hellmer. “Gifted children are intense in many different ways,” she says. “For all kids, it allows them ways to express themselves, and it’s especially important for gifted kids because they are very socially conscious, and they can express that in a safe environment.”

Ruddy says that arts can reach gifted children – and indeed all children, in very specific ways: showing them how to solve problems creatively, promoting inquiry and supporting divergent thinking, reinforcing motivation and self-confidence, providing insight into historical and diverse cultures, and making connections to other academic areas like math and music or visual arts and science.

Reinforcing those connections is key at Roeper, and teachers and students have the freedom to really dig into a subject and go where it leads them. For example, Ruddy was talking to some fourth- and fifth-graders in a three-dimensional art class about the Terracotta Warriors sculptures in China. This led to the students exploring the history of that work and doing their own interpretations of terra cotta sculptures. “They were following their voice and their passion,” she says.

Another curriculum connection happened when she and a science teacher teamed up to offer a class about inflatables. The students melded physics and art to create sculptures that floated in the air, reinforcing the connection between the two subjects rather than teaching them in silos.

In the theater company, it’s their mission to choose works with a sense of social justice, Hellmer says. That means a lot of research done outside the theater on the historical context surrounding the play they are performing. “We do a lot of exploration on the role of arts in social justice and how the arts affect those issues,” Hellmer says. For example, they performed Cinderella one year and discovered the Rogers and Hammerstein version of the show was originally developed not for the stage but for a television production. Students decided to put commercial breaks into the performance and researched what type of commercials might have been airing at that time, which led to discussions of changing social values.

Both teachers say the opportunity to work in a school where arts are not just included, but valued as a very important part of the curriculum, is a joy. “To share my passion with such passionate students is an incredible experience,” Hellmer says. “It’s an incredible thing as a teacher to be in a place where there is so much support and where everyone understands how important art is to education.”