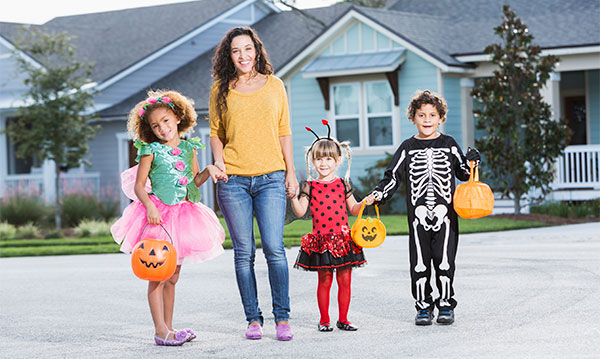 The costumes, the candy, the decorations and the ability to stay outside into the night make Halloween one of the year’s most exciting holidays for kids.

But without careful planning and conversation, Halloween can be incredibly scary for parents. In fact, Safe Kids Worldwide notes, “on average, children are more than twice as likely to be hit by a car and killed on Halloween than any other day of the year.”

Erica Surman, a nurse and Pediatric Trauma Program manager at the Beaumont Children’s Pediatric Emergency Center, offers her top safety tips for families to discuss and keep in mind for Oct. 31.

Make sure costumes fit properly to avoid tripping hazards, and check to see if the material is flame resistant in case of candle-lit jack-o’-lantern encounters, Surman suggests.

“We don’t recommend masks because they can impair the vision, and just making sure if they use makeup that they use the makeup that the FDA has tested,” she adds. Plus, avoid decorative contact lens, she warns. “We really advise against using those,” she notes.

Another costume consideration: “Parents want to make sure they pick costumes that are going to be lighter in color if possible,” says Surman. Think about how the costume will show up in the dark when the sun goes down.

Have a stubborn kid who insists on a costume made of darker material? Consider tip No. 2.

2. Make sure kids are visible

Surman references a survey from Safe Kids Worldwide that found, “only 18 percent of kids actually have parents that put reflective tape on their kids’ Halloween costumes,” she says. “I think that’s something that people do not really address.”

Glow-stick necklaces and flash lights are great for illuminating children from the front, but reflective tape on children’s backs is especially helpful for drivers who may not be able to make out a child crossing the street.

“Basically, we want to kind of let kids know that they’re invisible to the cars if they’re wearing dark (costumes),” she says. Beaumont Children’s will be giving out free reflective stickers at the organization’s table during the Zoo Boo celebration this month at the Detroit Zoo.

3. Teach kids about crossing the road

Before Halloween night, take the time to let children know how important it is to cross the road properly – despite how excited they may be to get the candy bar across the street.

Let kids know they cannot dart into the street. They should also use the sidewalks instead of cutting across lawns – and they should only cross the street at crosswalks.

Kids should also avoid wearing headphones, texting or playing games on cellphones while walking around, she notes. Make sure kids know to make eye contact with the car’s driver before crossing to ensure the driver is aware they’re crossing.

And parents, this one’s for you: “Ideally, parents wouldn’t be driving their kids around,” Surman says, because “that just adds to the traffic.”

4. Make a game plan and lay down the rules

“Some parents assume that because there are so many people out, it’s safe to let their kids roam the neighborhood in the dark,” Surman says. But it isn’t, and kids and teens need to know how to watch out for themselves, too.

Have conversations with children about Halloween plans before the big night. Is your child going trick-or-treating without you this year? Will they go with a group of friends? Will your child be supervised by another parent? Have you communicated with that parent about the plans?

Should your child be going trick-or-treating alone this year? Surman notes, “if they are under 12, they should go with an adult – even 12, it depends on how mature they are.” Plan accordingly with your tween.

A few other questions to mull over together: What route are they planning to take – or how far are they permitted to walk? Is their cellphone charged and do they know to call if there’s an emergency? Do they need to check in or be home by a certain time? Do they know the rules about not entering strangers’ houses or garages when they aren’t with you?

Surman also recommends staying in touch with neighbors, if you know them. You can check in with them about your child’s whereabouts and if they’ve come by to collect candy yet.

It seems every year there’s some scary news story about danger lurking in Halloween loot. Parents should dump out and inspect the candy before allowing kids to eat it. Anything that is ripped open or was homemade by a stranger should be pitched.

Parents should also make sure kids under 4 years old don’t get their hands on candy that is a choking hazard. Surman recommends parents keep an eye out for potential food allergy risks, if their kids have them.

If kids want to snack on candy while walking, Surman says parents could give their kids a few pieces of candy from their own home before they head out. That way parents have a chance to inspect the new bounty when kids are back from trick-or-treating.

The best way to prepare for any situation is to talk together, role-play different scenarios and ask your child what they would do if each occurred.
Communication is vital to avoiding mishaps on Halloween. “It’s important to have a talk with them,” she says.