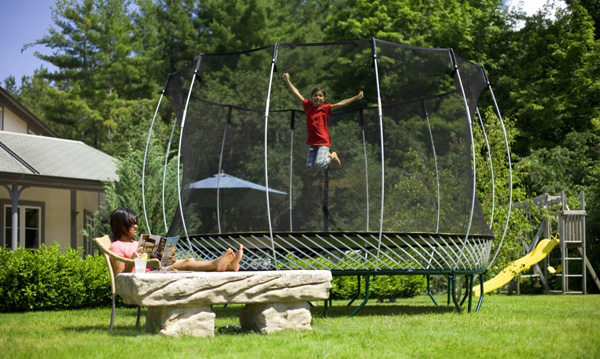 The arrival of spring often brings with it another kind of spring – those of backyard trampolines. But it is these very springs that present some of the most common trampoline hazards, maintains Dave Byrum, owner of New Hudson-based Kids Gotta Play.

“The Springfree® line of trampolines is the only that we sell,” says Byrum. “Their No. 1 asset is that they have no springs thereby eliminating 90 percent of product-related trampoline injuries.”

Byrum explains that Springfree® was designed by an engineer who wanted a safer trampoline for his own child. The result is a trampoline intentionally designed to remove the common safety hazards that contribute to the approximately 100,000 U.S. children injured on trampolines annually.

“No springs means no holes for an arm or a leg to fall through, no fingers getting pinched,” Byrum says.

He goes on to explain that the fiberglass composite rods mounted on the Springfree® frame mean that the net poles will bend and give against pressure unlike the stationery steel net poles standard on conventional trampolines.

“It’s like when a fishing pole bends once it hooks something,” he explains. “When the fish breaks free, the pole springs back up. It’s the same concept here.”

Byrum acknowledges that while the Springfree® line dramatically reduces the risk of trampoline injury, there is still injury potential when jumpers take on acrobatic feats, like flips, for which they are not properly trained.

“To do flips, you really need to be gymnastics trained,” he says.

Byrum maintains that the gold standard for trampoline safety is to limit jumpers to one at a time.

“If parents choose to let more than one child jump at the same time, they must instruct their kids to stay away from each other,” he says. “It’s just logical. If you have five kids all jumping at the same time, someone is going up when someone else is coming down. There’s huge potential for collision.”

Byrum’s rule of thumb is that kids 5 years of age and under are simply too young for trampoline play.

Byrum’s other safety tips include ensuring trampolines have an enclosure net.

“Retailers can’t even sell trampolines without them,” he says. “The ones we sell always come with a net.”

As for jumping on a wet trampoline, Byrum says that this is a common summertime practice.

“A lot of people will put a sprinkler underneath their trampoline,” he notes. “In such a case, I recommend jumpers wear water shoes or something similar. In just their bare feet, jumpers are more likely to slip on the wet surface.”

Another area around which to exercise caution is when it comes to putting things on the trampoline, Byrum says.

“A ball can become a projectile when bouncing,” he explains. “Springfree® developed a fun basketball hoop that, in keeping with the brand’s philosophy, is a piece of equipment in motion. It contains no hard surfaces and flexes accordingly. Known as the FlexrHoop , it comes with a bright yellow ball that can be inflated to two psi of pressure so that if you do land on it, it deflates.”

When it comes down to it, Byrum wants parents to know that jumper behavior is the area they need to focus on most closely to ensure their child’s safety on trampolines.

“The biggest safety concern really is improper use,” he stresses.