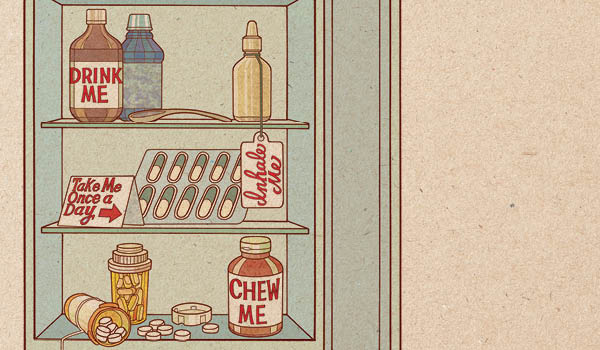 The decision to start your child on medication for a mental health issue is never an easy one. The fear of side effects, concerns about dependency and other questions weigh heavily on parents’ minds.

The road is made even more difficult to navigate when you add in common misconceptions, outside opinions and the stigma often associated with putting your child on medication.

“Parents commonly feel like I don’t want my children to become different, or addicted, even though most of these medications are non-habit-forming,” he says.

While many people believe that medications are overprescribed among kids, the numbers tell a different story. According to the Centers for Disease Control and Prevention, about 7.5 percent of children under age 18 are on psychotropic medications, Zubairi says.

“If you look at the prevalence of ADHD, some of the data show that almost 10 to 11 percent of children suffer from ADHD,” he points out, and that’s not counting other diagnoses and the fact that many mental illnesses are considered under-diagnosed. “Contrary to what many people believe – that a lot of kids are taking medications – we believe that in some ways many kids who need help with these symptoms are not taking them.”

The overall increase over the past 30 years in youth taking medications for ADHD, depression and anxiety also means more children are getting treatment than in the past.

“There has been more acknowledgment that there is mental illness in young children, so there’s been better diagnosis, better recognition and relatively safer treatments available,” Zubairi says.

The most common psychotropic medications – a term referring to any drug used in psychiatry – prescribed for children fall into four main categories: medications for ADHD, such as Ritalin and Adderall; antidepressants; anxiety medicine; and antipsychotic medications. Each is unique.

There’s often a harmful stigma associated with taking medication for a mental illness – and that goes for both children and adults. Young children sometimes worry about their classmates noticing that they need to take medicine during the school day.

“There are many concerns parents will bring to the office and definitely stigma is one of them,” Zubairi says. “Fortunately some of the newer medications we have don’t need to be given more than once a day, so that definitely helps with that issue.”

Dependency is another common concern, but Zubairi points out other perils if children who have ADHD aren’t treated.

“Many studies have shown that if you don’t treat ADHD, there’s a higher risk of using drugs and alcohol as a teenager than when you treat ADHD,” he says.

Concerns are best discussed directly with a doctor if you feel your child might need medication. Your child’s pediatrician or primary care physician is usually the best place to start, Zubairi says, and a psychiatrist can also be consulted if needed.

In many cases, therapy with a psychologist is considered before the use of medications.

“I think that we should always look for less invasive treatments first,” he says, and those treatments should usually continue after medicine is added. “Some symptoms do not improve with medication. A therapist can help them learn those skills.”

In fact, psychotherapy is key to getting the best results – especially in cases of depression when outside factors such as issues at home or school play a role.

“Without psychotherapy you are never going to get the full response of the antidepressant,” he says.

When discussing side effects with your child’s doctor, ask about which possible side effects are most common and which are most serious.

“Even Tylenol has many side effects,” Zubairi says. “I feel like if the parents are well aware of what to look for, you definitely reduce the risk of harm to the children. And it reduces anxiety when they know what to expect.”

Many parents fear their child will become “zombie-like” when on psychotropic medications. A sedative effect is possible, he says, but that would be a sign that an adjustment is needed.

“I tell parents that a lot of times it happens either because we have picked a very sedating medication or the dosage is too high,” he says. “I tell the parents that it’s not our goal to make a child look like a zombie. The ideal thing is not just to control symptoms but also to improve functioning. A child who is so sedated is not going to function in school.”

Not a lifelong decision

Many people assume that once a child starts taking medication, they’ll need to be on that medication indefinitely. That’s not the case, Zubairi says.

“These children are growing. Most of the disorders that we treat change their nature over the life span,” he says. “I do not want to ever tell parents that once you start that you’re going to be on them for the rest of their life. Some people will, some may not.”

Fortunately, additional medication options for children are available now more than ever before.

“I think parents just need to know that medications are not all the same. A lot of times the parents’ questions are more about generalities. Some medicines are addictive, not all of them are,” Zubairi says. “I think that compared to 20 years ago, things have really improved in terms of the options available.”