Roeper School teacher explains the benefits of project-based curriculum and why it's a best practice in gifted education. 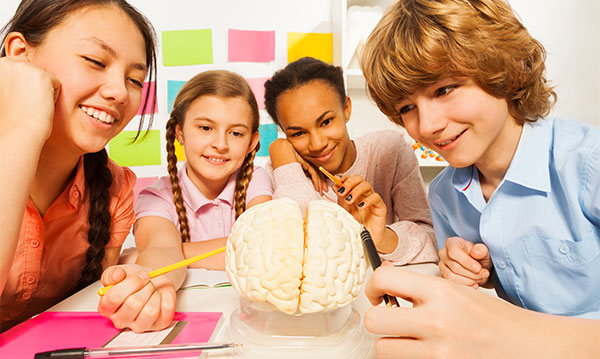 “What does a typical day look like at your school?”

It’s a common question parents ask when evaluating educational options for their children, but it’s not quite as simple to answer at places like The Roeper School that utilizes a project-based curriculum from preschool through high school.

And that’s a good thing, parents quickly find out.

That’s because using project-based curriculum means kids aren’t doing the same things every day based on lesson plans made months ago. Instead, students are actively engaged in solving a real-world problem or working toward a common goal – often one that they helped come up with.

“The thing about project-based learning is they’re all really able to get involved at their own level,” says Kendra McKenzie, a stage one teacher for ages 2½ to 5 at Roeper’s Lower School campus in Bloomfield Hills.

This educational philosophy is a best practice in gifted education since it incorporates different learning styles, individual strengths and fosters a sense of community. It begins with Roeper’s youngest students and continues into the upper grades.

In McKenzie’s Stage I classroom – a mixed-age, play-based environment – project-based learning is evident in all they do. There are no assigned seats, you’ll find tables instead of desks and there’s not a worksheet in sight. Yet math, science, language arts, social studies and social-emotional learning are all taking place.

“All of those things can be incorporated into your project,” McKenzie explains. “These kids are using skills in all of these areas and they’re developing these skills without sitting and doing worksheets.”

So how does that look on a typical day? It depends on the project. Previous projects have focused on community outreach, artists, architecture and the human body. “We all go off of what the kids are interested in,” she says.

In McKenzie’s Stage I class last year, for example, the major project of the year was creating a movie based off The Three Little Pigs. It all started with an observation McKenzie made in the fall, noticing that her students were especially into building and also enjoyed putting on plays in the dramatic play area.

So she brought in several versions of the classic Little Pigs story and they decided to make a movie together. The kids worked for months on building a puppet theater, brainstorming characters and making a storyline (there was a dinosaur instead of a wolf and five houses instead of three).

“We made a script, we rehearsed. And then when it was time to film scenes, we divided up jobs,” McKenzie says. “They’d say ‘action’ and ‘quiet on set!’ Some people would help set up the scenes and take them down.”

In the end, everyone in the class had at least one line.

“We edited the movie together and then we did a big red carpet movie premiere and invited family,” she says. “The kids all dressed up, they loved it and the parents loved watching it.”

It was a huge success, McKenzie says, and not just because everyone had a great time. They were learning, too, as students made posters to promote the movie, wrote out tickets for guests and experimented with math concepts, such as measuring, as they designed scenery.

“It’s finding creative ways for them to practice these skills that also are meaningful,” she says. “Everyone’s a contributor. Everyone’s supportive of each other.”

Field trips, changing up the classroom configuration and bringing in special guest speakers can also be part of a project. Teachers using project-based curriculum must be flexible, McKenzie points out, since the students will guide the project’s direction.

“You can’t plan out your curriculum for two or three months ahead of time,” she says. “The nice thing is you come together as a group and it starts with an idea that comes from the kids. Sometimes as a teacher you think it’s going to be one thing and it ends up being something else. You have to be able to change course with them and make it something that’s authentic for their learning.”

From savory to sweet, these Super Bowl dips will satisfy any craving your guests might have. Try one of these recipes, which are fast (and easy!) to make for the main event.
Read more
Sponsored Content