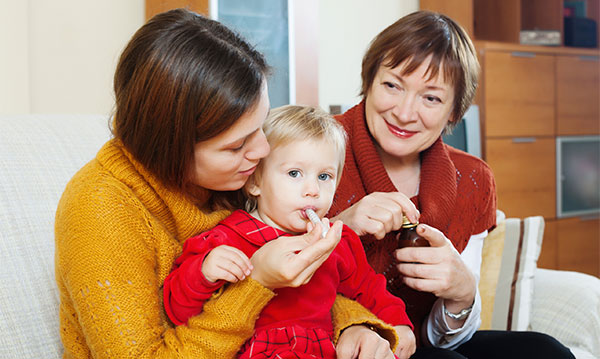 It seems like family members are always eager to pass down their go-to home remedies and health advice once you have a baby. Yet despite their best intentions, relatives don’t always know best.

Ever heard age-old adages like, “you should starve a fever but feed a cold,” or had someone suggest a bit of whiskey for a teething baby’s gums? No doubt these recommendations come from a good place, and with many of these remedies, “they’re over the counter, they’re in your kitchen cabinet, (and) they seem to be pretty harmless,” says Dr. Lynn Smitherman of Children’s Hospital of Michigan in Detroit. But especially with babies and children, she stresses exercising caution – even if the advice is coming from trusty grandma and well-meaning aunt June.

Here are just a few tips of old that Smitherman says are likely not the best way to treat your child’s ailments.

1. “You should starve a fever, but feed a cold”

“I don’t think that’s really the best adage,” Smitherman says. While you may not be hungry when you have a fever, hydration is really important – especially for sick children – so the whole “starving” part could lead to dehydration and is not a smart idea. “Feeding a cold, with all that mucus and everything? Nobody’s really excited about eating,” she says. But again, fluids are key in both cases here.

2. Rubbing whiskey on baby’s gums (and other teething tricks)

The majority of little ones who are teething will be fussy, so it’s no wonder there are several homespun remedies floating around. Rubbing whiskey or other alcoholic beverages on baby’s sore gums? Not healthy for obvious reasons. Putting an egg in a sock and hanging it on the child’s doorjamb to help with the pain? Probably won’t be effective. Even using teething necklaces is dangerous because of the risk of strangulation, Smitherman says.

Also, be careful of using topical teething gels that contain benzocaine, as it can lead to a methemoglobinemia, a condition the Food and Drug Administration has warned is caused by a reduced amount of oxygen in the blood stream, thus causing baby to turn blue – among other serious symptoms.

Instead, Smitherman recommends acetaminophen for relieving pain and discomfort.

“Just make sure to dose according to the directions on the box,” she says. “Also, teething rings are a tried and true treatment.”

3. Putting butter on a burn

“You’re actually frying the burn and making it even worse,” Smitherman says. According to the BBC, this one is centuries old. The idea was to seal the burn off from air and infection, but as the report notes, this also seals the heat in. Not good.

“Instead of butter, run cool water over the area,” Smitherman recommends.

Smitherman says an old “cure” for colic was blowing tobacco smoke at a colicky baby. This is really bad for the lungs – and even more so if you’ve got an asthmatic child, for instance. Some parents also turn to the spice asafetida, but this has also been known to cause methemoglobinemia in babies, which will require immediate medical attention.

Gripe Water is another over-the-counter remedy that should be used with extreme caution, Smitherman adds. Non-medical soothing such as swaddling, rocking and walking can be effective.

5. Using rubbing alcohol to bring down a fever

While some may try putting isopropyl alcohol on their child’s skin to cool her fever, this alcohol can be absorbed, leading to alcohol poisoning.

The origin of many of these health tips is cultural, Smitherman says. Also, some come from a different era, where as today, many people have access to health care (though it’s not always a convenient time to seek it, like 2 a.m.). Part of the continued use of some of these remedies is a convenience factor – plus the advice is “coming from a trusted source,” she adds.

To avoid serious mishaps, Smitherman suggests keeping a couple of books handy that address many common childhood conditions, like The Holistic Pediatrician by Kathi J. Kemper, Caring for Your Baby and Young Child: Birth to Age 5 from the American Academy of Pediatrics, and Touchpoints by T. Barry Brazelton.

The most important piece of advice to remember before you consider a remedy is to talk to your child’s pediatrician. Even if it’s the middle of the night, the office may have an on-call number. As Smitherman says, “Your pediatrician is not going to steer you wrong.”