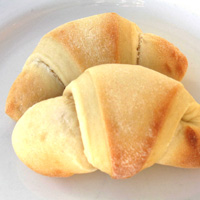 Roasted turkey is not my specialty this time of year. Sure, I’ve done one or two before, but my preferred method is to bake them in one of those cooking bags and be done with it. Basting? I usually forget. Herbs? Yeah, I usually toss in a few. Gratefully, I’m usually sharing the holiday with family and friends. Someone else takes care of the main dish and I’m assigned, “Whatever you want to bring.” Rolls. That’s what I like to make (well, that and dessert – but since I’ve been posting a lot about sweets lately, I’ll stick with yeast here).

I’ve been making the same butter crescent roll recipe since I was in high school. I tore the recipe out of a mailer my mom got – it was advertising some new cookbook. Whether it’s Betty Crocker or Julia Child or some nameless baker that originally crafted the recipe, I have no idea – but thank you!

These rolls come together quickly and turn out a soft, dense dough. While they’re usually foolproof, I have had a few mishaps (they still tasted good, but they weren’t quite as presentable). On the second rising, the rolls should only go for 30 minutes – no more, or the rolls get too airy. You should bake these until they’re just golden brown. The bottoms can burn if you let them go too long.

You can make these ahead – but if doubling the recipe, that’s a no-go. I just make one batch and then another if I need extras. To make these rolls ahead of time, bake them until they’re just firm and then let them cool on the pan (you can then freeze them and put them right on the pan when you’re ready for the final baking). Once you’re ready to reheat them, preheat the oven and then brush them with melted butter (for a richer flavor) or with an egg that has been whisked with a teaspoon of water (for a shiny roll).

From savory to sweet, these Super Bowl dips will satisfy any craving your guests might have. Try one of these recipes, which are fast (and easy!) to make for the main event.
Read more
Indoors