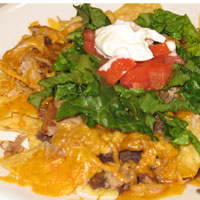 For some, football season is all about the team rivalry. For others it’s all about the commercials (especially during the Super Bowl). With our family, it’s all about the food! Finger food reigns. You need something you can eat between cheering on your favorite team and, of course, chewing out the refs for questionable calls.

Hands down the favorite finger food for my crew is Super Nachos. I lie out the nacho fixin’s and let each person load up their plate and then microwave each portion. So what does it take to construct a “super nacho”? Here’s a play-by-play.

Layer a large plate with nachos and then beans, chicken pieces and, finally, cheese. Microwave each plate for 45 to 60 seconds on full power or until all of the cheese is melted.

Offer sour cream, shredded lettuce and diced tomatoes as toppers on the nachos. You should also have a selection of salsas on hand, like green salsa verde and the traditional picante. You might also buy a bottle of Cholula sauce (the Mexican equivalent of ketchup) to add a little heat to your meal.

No matter if your favorite team wins or loses, with this yummy football-ready meal, your family will be cheering for more. After all, it’s good to the last crumb!