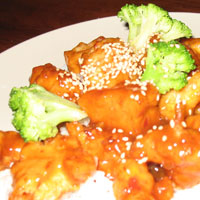 Valentine’s Day shared the date with another important holiday this year – the start of the Chinese New Year, also called the Lunar New Year. In China, the holiday is the equivalent of sorts to the United States’ New Year celebrations. But there is more tradition tied into the day – it’s almost like Christmas, New Year’s and the Fourth of July all rolled into one!

Now, I won’t even to pretend to understand all the ins and outs of how this particular date is decided (it’s different each year). But by the name, I’m thinking the phases of the moon figure into it. What I do know is that the beginning of the Chinese New Year is a great excuse to break out some of my favorite recipes. That means it’s time to fry some battered chicken pieces, toss them with some sweet and tangy sauce and serve my kids’ favorite Chinese dish – sesame chicken.

In Canton (the Michigan city, that is), there’s a little Chinese restaurant that I love, simply called Best China. When we first moved to the area, we asked the checker at the local Asian grocers where we could find the best Chinese food. She mentioned a restaurant that we’d passed dozens of times, but never really noticed. Best China sits at the end of a strip mall, not far from a gas station and a pizza place. I was hooked the first time we walked into the nondescript restaurant and I could smell a mixture of ginger, garlic and sesame wafting through the air. While there’s plenty of tempting dishes on the menu – the hot-and-sour soup is not to be missed – the sesame chicken is our all-time favorite.

Through the years, I’ve concocted my own version of this family specialty. I tweak it a little bit each time I make it (you should too, to fit your family’s tastes). And while it’s not as good as Best China’s, it’s pretty darn close.

Don’t forget! If you are planning a special Chinese feast to celebrate the “new year,” have your children create decorations or placemats to dress up your dinner table. The year 2010 belongs to the tiger (much easier to draw than 2009’s year of the ox!).