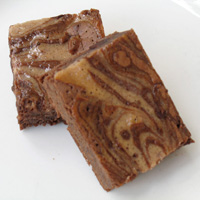 The other day I made chocolate raspberry brownies for a get-together with friends. Here’s the problem: With the dark color of the brownie batter and the equally dark color of the raspberry jam swirled into the batter, these looked like your standard brownies. Now, there’s nothing wrong with a regular brownie – I could eat them all day (I shouldn’t, of course, but if you forced me – or asked – I’d be happy to).

But part of the experience of eating dessert should be a bit of visual appeal, right? So I set out to find a brownie that would show off the raspberry punch without adding too much extra work. While I wanted to stick strictly with raspberry jam, there’s just no way to lighten the color without a little help.

The finished brownies didn’t necessarily scream, “Hey, there’s raspberry in here!” But with baked-on swirls, they did hint, “There’s more than just chocolate inside.” I will say, the cream cheese does take out a bit of the tart flavor and fruitiness of the raspberry jam – but, in return, it gives a richness and creaminess it didn’t have before. The recipe also passed the “asking-for-seconds” test. Of course, where chocolate is concerned, I haven’t had my kids not ask for seconds – but hey, they still passed.

If raspberry’s not your favorite flavor, you can use just about any jam to perk up the cream cheese (although grape wouldn’t be my top choice). Apricot, strawberry, mixed berry – any would make for a yummy brownie.