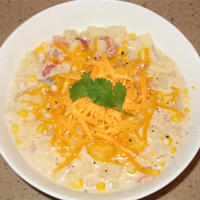 Digging out the last Thanksgiving leftover from the plastic container at the back of the fridge, I must admit I’m done with making big meals for a few weeks (and with turkey!). Once I’ve had my fill of turkey sandwiches, followed by turkey nachos and, of course, a day of pumpkin pie for breakfast, I crave different flavors and meals that require minimal cleanup (not like the mountain of dishes I went through on Nov. 27 – and we were only taking a few side dishes to my brother’s house, not doing the whole shebang!).

For easy meals that make the whole house smell good and warm me up, I like to make a big pot of soup. Sorry – I mean chowder. See, if I tell my family we’re having soup, they think it’s an appetizer, not the entree. But if I say we’re having “chowder,” then it makes for a meal.

Usually, when I’m making a soup (did I say soup? I mean chowder … or stew), I break out the crockpot. But for this particular recipe, cook it over the stovetop using one pot. Sometimes, to make sure the potatoes get tender, I’ll use a couple pans, but I promise, this creamy potato-bacon chowder is easy cleanup.

Another added plus with chowders: Your ingredients don’t have to be exact, and neither do the cooking times. You’ll notice that I do offer both in the recipe, but if you have some extra chicken or diced, cooked carrots on hand, throw ‘em in!

So if you’re looking for a simple meal with all the comfort food favorites – like potatoes, bacon and corn – you’ll love this creamy combo. Don’t forget to make some warm muffins or toast bread to go along with your chowder!

Good to the last crumb. (Or slurp!)