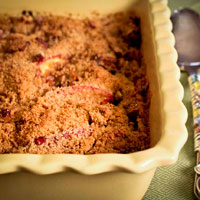 Warm peach slices with a crumbly, buttery filling, topped with a scoop of vanilla ice cream was a summertime tradition growing up. Of course, I’ve got to continue that one! When I see peaches at the grocery store or farmers’ markets, I figure it’s peach crisp baking time.

I looked through several recipes – and even tried one that literally fell flat – before deciding on the one below. In my mind, fruit crisp has to have oatmeal in it (that’s so you can eat it for breakfast on day No. 2 and feel like it’s nearly as healthy as oatmeal on its own). But most recipes relied just on oatmeal without including flour, which made for a less crisp crust.

Another point on the crust: Growing up, I had the job of cutting the butter into the dry ingredient mixture by hand with a fork and knife. It took forever, but I didn’t mind because I’d chitchat with my mom while she peeled the peaches. Today, I wanted to speed up the time it takes to cut in the butter – so I use a food processor, instead. The first time I added in all of the dry ingredients from the beginning, but then my oatmeal was reduced to crumbs. Ditto for the nuts! So, to keep my oatmeal and nuts from disappearing, I processed the dry ingredients with the butter first; then added in the oatmeal and nuts at the very end. Two pulses so the pieces are still chunky.

That brings me to fruit. Growing up, my mom put the fruit in without adding anything to it. These days I like to add a bit of cornstarch to help thicken the fruit juices – that also helps keep the crisp, well, crispy. I also add in the cinnamon to the fruit versus putting it in the crisp.