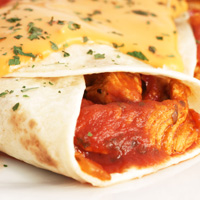 Enchiladas. One of my favorite foods in the world has to be these spicy, rich chile-infused little wonders. Not an enchilada fan? I can’t say I’m surprised. Unless you’ve sampled an enchilada dish from an authentic Mexican restaurant, then you likely either ended up with a canned sauce covering the warmed tortillas – or worse – someone passed along their grandmother’s recipe for baked enchiladas that have been coated in cream of chicken soup. Yikes! Now, there’s nothing wrong with cream of chicken soup, but it has no business in an enchilada. You can go ahead and call that a glorified tortilla casserole, but don’t confuse it with true Mexican enchiladas.

Real enchiladas take time and some unfamiliar ingredients to make at home, but they’re not hard – we’re not talking souffles or anything here! And hey, there’s even a Mexican holiday coming up Sunday, March 21, to commemorate a past president, Benito Juarez’s birthday. (Perfect excuse to try a new dish.) With St. Patrick’s Day out of the way, it’s time to move from green to red – chile red.

Here’s the lowdown on making a good enchilada sauce – it’s all about the chiles. I should take a step back here and point out there are several different kinds of enchilada sauces, from the dark, complex mole to the green tomatillo-based varieties. But today, I’m giving you the lowdown on the red chile sauce. The base for the sauce is dried chiles. You can find these in bags at a Mexican grocer or sometimes in the Mexican section of your local store. I know it may be a pain tracking down the chiles – but it’s worth it! The chiles then require some prep work. You need to roast, boil then blend the chile skins to make the spicy enchilada sauce. I often do large batches of sauce and freeze the extras in Ziploc baggies so they’re easy to pop out and use when I get a hankering for something spicy.

After you’ve perfected your sauce (and I promise, I’ll do other versions in the future), you’re ready to assemble your enchiladas. Most recipes call for baking the enchiladas in the oven. There’s no need. In Mexico, the corn tortillas are flash fried and then dipped into the sauce then reheated on the plate. You can do the same at home. If you’re not keen on frying, you can toast the corn tortillas, but they’ll be soggier (the oil keeps the tortillas from becoming saturated in sauce).

If you review the recipe and it sounds a little overwhelming, here are a couple suggestions: Go ahead and buy canned enchilada sauce at the grocery store. El Pato is the best alternative to homemade. Or, head to Detroit’s Mexicantown and order a dish of red chile enchiladas. Maybe after downing a plate of savory, spicy enchiladas, you’ll want to make your own at home. These red chile enchiladas are good to the last crumb!