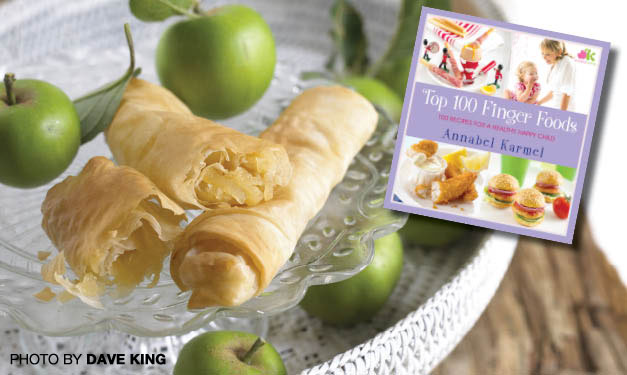 Standard kiddy party fare seems all cakes and cupcakes, messy frosting and sugar rushes. But not this time! Handheld apple pies are an adorable modern twist on desserts that, when warmed, are a perfect cold-weather goody. Not to mention, they're fun for kids to eat.

Try this recipe from Top 100 Finger Foods: 100 Recipes for a Healthy, Happy Child by Annabel Karmel, a leading author on cooking for kids. Her light, crispy pastries are refreshing – and the cinnamon-apple filling is just the right amount of sweet to satisfy taste buds of all ages. And, she adds, there's more fruit than "gloop," making for a nice health boost.

Hints: Try other fruit fixin's for an easy-as-pie switcharoo, like cherries, blueberries or peach. More adventurous? Apple pie is amazing paired with a bit of cheddar cheese (serve it on the side). Milk is a classic pie companion beverage; serve it milkshake style, making it a wintry affair by adding a few squirts of chocolate syrup and a drop of peppermint extract.

For a party: Kids can grab their handheld pies and eat them on the go and munch them in front of a movie. Or, serve the pies at the table, adding a scoop of ice cream to everyone's plates. It'll be a cool twist.