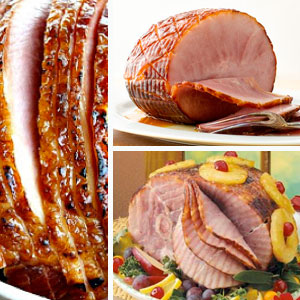 Does your holiday meal include baking up a large ham? The ancient tradition appears to have roots in Norse mythology – serving boar was a way to honor one of the Norse Gods, notes the Reluctant Gourmet. But perhaps ham has become a holiday staple for other reasons, too: Ham is easy to bake and beautiful to present as part of your Christmas feast. Play with new flavors with your ham this year by trying out baked ham with simple peach mustard or blueberry-chipotle ham. Then again, instead of baking you might want to try smoking your ham. Or, keep your dinner preparations simple by using the Crock-Pot to cook your ham. One of the best parts of making a holiday ham? Leftovers!

Looking to the classic, picture-perfect ham for your Christmas table? Then try this holiday ham recipe from Taste of Home. The ham is bathed in the juice from canned pineapple slices. Secure the pineapple rings with toothpicks on the uncooked ham and top each one with maraschino cherries.

There are only three ingredients in this baked ham with simple peach mustard recipe from About Food. Combine peach preserves or jam with spicy brown mustard. Slather the ham with the mixture during baking. You might even serve the ham with sliced peaches to the side.

Ever wonder how to get that sticky, sweet flavor of a perfect honey baked ham? This recipe from Mommy's Kitchen for honey baked ham includes all the secrets. The key is a glaze made with honey, orange juice, apple juice, brown sugar and, of course, honey!

Sweet berries get a spicy infusion with this recipe for blueberry-chipotle ham glaze from Betty Crocker. Whisk together blueberry preserves with chopped chipotle chiles in adobo along with brown sugar. Generously brush your ham with the glaze during the last 45 minutes of baking.

Make turning out a perfectly moist ham simple with this recipe for slow cooker maple brown sugar ham from Pillsbury. The ham cooks on low for 3-4 hours. Cover the ham with glaze before cooking and use the meat's juices to baste it after removing it from the Crock-Pot.

Break out the smoker! Instead of baking the ham, smoke it. Smoking a ham takes time – follow these directions for double smoked ham from CHOW to get just the right flavor. Smoke for 2 hours, remove and add a glaze and then smoke again for 2-3 more hours.

How to Winterize a House: Tips and Advice

Winter is officially on its way, so what are the tips on how to winterize a house? We spoke to a plumbing, electrical and heating and cooling expert for the answers.
Read more
Things to Do

Fun Things to Do in Northern Michigan

The natural wonders of northern Michigan are within driving distance for families in metro Detroit and Ann Arbor.
Read more
Sponsored Content

How to Support the Family Impacted by Autism