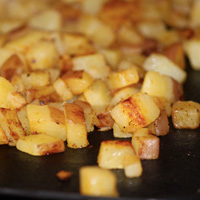 OK, let's just get this out of the way: I know that picking up a bag from the freezer section in the grocery store and making those hash browns might be easier. But tastier? Not close.

I'm all for taking shortcuts in the kitchen, especially if it tastes just the same – or better – as when you make it from scratch. Case in point: green bean casserole. I've gone so far as to fry my own onion pieces for the topping and crafted a cream of mushroom soup. And the results weren't worth the effort.

But hash browns are another story.

First off, I have no idea what kind of potatoes they're using in the store-bought versions, and I'm picky about my hash brown potatoes: I like to use either red or Yukon gold. Both are softer and have more flavor than your standard Idaho potato. I also like to leave the skin on the outside of the potato.

I also take an extra step to the hash browns by boiling them in water first (as you would for mashed or potato salad) before frying. I cook them until they're just soft, before throwing them on the skillet. My goal – soft hash browns on the inside, crisped on the outside.

Still not convinced it's worth the effort to slice a bag of potatoes? One last try – I double the batch so that I can use the potatoes in other dishes throughout the week. We make breakfast burritos, thick chowders, and other meals by mixing in some of these pre-cooked potatoes.