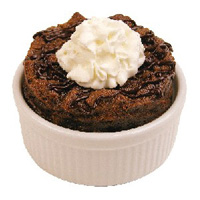 Before I knew better, pudding was something that came in either little four-pack containers or in a powder packet inside a box. That was, until I tried bread pudding. The savory-sweet combination of warm, eggy bread pieces infused with cinnamon and butter gave the dish a feeling of dessert French toast. Then I stumbled across a recipe for bread pudding that added another layer of flavor – chocolate – and I was hooked. Toss in some walnuts and that’s a perfect dessert (I like anything with walnuts in it).

Making chocolate bread pudding is easy. Plus, you can use up any of the bread that you might have lying around, getting dried out to make this recipe (the more dried out, the better). While you can serve this dish warm to guests, I like to bake it ahead of time and serve it chilled. The chocolate flavor gets more intense once the bread has had time to fully soak in the flavors.

The chocolate bread pudding works best with a heartier white bread. This is one of the few times I wouldn’t suggest going the whole wheat route. Even doing a half-and-half combo yields a too-chewy pudding (trust me, I’ve tried it). I like using my own baked bread for this recipe (or if I don’t have any handy, I opt for buttermilk bread from the store).

There’s a few ways that you can bake the bread pudding. To really impress guests, I’ll often make individual portions. I divide the batter equally into six 7-ounce ramekins and serve the dessert in the dish with fresh whipped cream on top, dusted with a little cocoa powder. If I’m in a hurry, I bake the batter in a 9-inch spring-form pan or even an 8-inch-square baking dish. Either way, I’d recommend keeping your slices small – this is one rich dish.

I like to dress up my plate to make the dessert look restaurant-worthy: It’s so simple and fun to do, anyway. First, I use a large-sized plate (I bought mine at IKEA); then I use chocolate syrup (Hershey’s is fine; it’s not for the taste, it’s for the wow factor) to create a design on the plate. Then, I put a slice of chocolate bread pudding in the center, top it with fresh whipped cream (again, dusted with cocoa powder). I like to add fresh fruit too – raspberries, strawberries, mangoes. However you decide to serve this dish, it’s good to the last crumb!