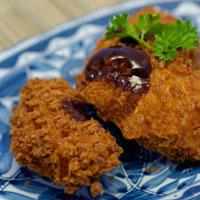 It seems that in every culture there’s some version of breaded, fried meat. In Italy, there’s veal parmesan; in Mexico, steak doused with bread crumbs is called milanesa; in Germany, cooks use crumbs from dried Kaiser rolls to make wiener schnitzel. I suppose chicken-fried steak could count as America’s contribution to this category. In Japan, thin slices of pork are battered with panko crumbs then fried to create tonkatsu. And, as Thanksgiving approaches, I can’t help but think of tonkatsu.

A few years ago, a friend invited me over to a pre-Thanksgiving meal where she was explaining how to cook a traditional roasted turkey, stuffing and, of course, pumpkin pie to friends of hers from Japan. Her friends knew as many English words as I knew Japanese, which amounted to two – “thank you” and “hello.” But once we started rolling out piecrusts, we found a common language: food. (Luckily, my friend is fluent in both Japanese and English.)

As a thank-you for the afternoon of all things Thanksgiving, my friend and I were invited over for some Japanese instruction. Of all the things we cooked and sampled that day (I don’t think I’ll ever have a taste for mochi balls, but the sweet red-bean paste was tasty), the pork tonkatsu became a favorite for our family.

You make tonkatsu as you might other breaded meats – with a few key differences. Thin slices of pork are dredged in flour, then whisked eggs, then panko breadcrumbs. Using the right breadcrumbs is key: Panko crumbs are not only crustless, but they’re also lighter than American breadcrumbs, making for a crispier coating. You can find panko in the Asian food aisle of just about any area grocery store (I find mine at Meijer).

Serve the tonkatsu over steamed white rice and veggies. Traditionally, there’s also a ketchup-like sauce served alongside it. While it’s known as “tonkatsu sauce,” my Japanese foodie friends call it “Bull-dog” – because that’s one of the more popular brands in Japan. While some grocers carry Bull-dog, you might have to go to an Asian grocery store to track it down. It’s worth making the trip: The combination of the sweet/sour Bull-dog sauce, crisp-fried pork and rice makes for a meal my kids ask for again and again.

So, November might conjure up thoughts of turkeys and stuffing for most people. But it also reminds me of exchanging favorite recipes, foods, and cultures.