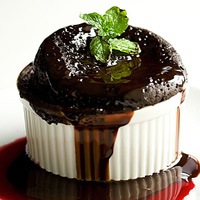 If you’re looking for the chocolate dessert to serve on Valentine’s Day – here you go. Velvety and smooth on the inside, moist on the outside, saturated with rich chocolate throughout, this molten chocolate cake recipe defines decadent. But it’s not hard to make. And it doesn’t take forever either (not to mention, you can make it a day or two ahead).

There are a few tricks to getting this recipe right. See, molten cakes are almost like a cross between a custard and a cheesecake (uh – both chocolate). So they don’t cook quite like a cake would, where you need to make sure that it’s done all the way through. But I need to take a step back before we get to the baking.

Prepping your ramekins (custard cups): You’ll need to coat the inside of the ramekins with baking spray (or you could brush with melted butter) and then add about 1 teaspoon of flour. Move the flour around the inside until it’s coated. This is exactly like flouring a bread pan, but it gets trickier when it’s a 4 ounce cup! Now, you can do this with muffin tins – I’m told. I haven’t tried it that way, but if you don’t have ramekins, that’s an option. This is the hardest part of the whole recipe.

Here’s the second hardest: figuring out when the cakes are done. Like a cheesecake, when you check for doneness you want the center to just jiggle. If the batter appears completely solid, you won’t have the gooey chocolate center that makes molten cakes, well, molten.

Okay, I take that back: There’s one more hard part (promise, once you get the hang of this the recipe isn’t nearly as complicated as it sounds!). You have a few options with taking the cake out of the ramekin. Here’s what I do. I run a kitchen knife around the outside of the ramekin and then place the serving plate on top of it. Jiggle; then lift the ramekin. If the cake doesn’t seem to be releasing or it’s not releasing altogether, I try to put everything back into the ramekin, top it with whip cream and call it good. Or you can put the ramekin in the fridge for a while and then try inverting again. Keep the dessert cold, if you wish, or put it in the microwave for nine seconds.

Ready to start melting some chocolate? This recipe won’t disappoint!