Now this is a holiday to remember! It's all about the doughnuts, so enjoy a sweet treat, homemade style, with one of these delicious recipes. 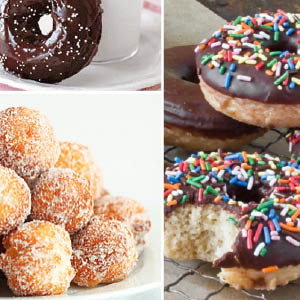 Break out the sprinkles: Today, June 7, is National Doughnut Day! Believe it or not, this day is no gimmick to sell more doughnuts (not that there’s anything wrong with that – I’ll take mine glazed, please). Beginning in 1938, the Salvation Army set aside the first Friday in June as Doughnut Day to commemorate the women in World War I who would serve doughnuts to soldiers. You can share this tidbit of history with your kids as you whip up a batch of your own doughnuts at home. Make them from scratch with a recipe for Krispy Kreme-style treats, or use premade dough to shape into doughnuts before putting them in the fryer. Then again, you might want to bake your doughnuts. Or try out King Arthur Flour’s recipe for muffin doughnuts.

Follow along step by step to make your own Krispy Kreme doughnuts with this recipe from Instructables. These doughnuts take time – and need to rise twice – to get the airy, melt-in-your-mouth consistency of the signature sweets. But all that effort is worth it when you bite into a warm, glazed doughnut.

Chocolate lovers, this doughnut is for you! Follow this recipe from Country Living for double-chocolate doughnuts. Cocoa powder gives the cakey doughnuts their first layer of chocolate. For the glaze, melt bittersweet chocolate into heavy cream before covering the doughnuts with an extra layer of gooey goodness. The white sprinkles are optional. Maybe use mini-chocolate chips?

Doughnuts don’t have to take hours to make. Turn out these doughnut holes in a hurry with this recipe for 15-minute doughnuts from scratch, courtesy of Cooking Classy. Now the real question is: What kind of topping should you roll them in?

Instead of making the dough, use canned biscuits for these semi-homemade doughnuts from Make and Takes. These treats are dangerously easy to make. You can make batch after batch of simple doughnuts with your kiddos. Time to heat up the oil!

You don’t have to fry doughnuts. These baked doughnuts with vanilla and chocolate glaze from theKitchn cut out some of the calories of the standard sweets by skipping the fryer altogether.

For an even simpler, faster approach to making this classic sweet, mix up some doughnut muffins from King Arthur Flour. Once you’ve baked the muffins, your kids can dip them into butter and then roll them in cinnamon and sugar. Seconds, anyone?