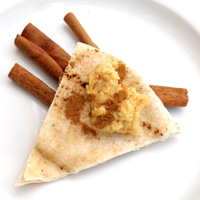 There’s nothing like the flavor of garbanzo beans and cinnamon. Let me try that again: What about peanut butter-cinnamon hummus? Searching through recipes online, it’s not hard to track down the main ingredients in traditional hummus. They are: chickpeas (also known as Garbanzo beans), tahini (which is a Middle Eastern sauce made from ground sesame seeds), garlic (lots!), lemon juice, olive oil (sometimes sesame oil), salt and pepper.

And the directions? Put the ingredients in the blender, pulse.

So it’s not surprising that you’ll find numberless variations of hummus, usually on the savory side – red pepper hummus, chipotle hummus and other pairings. But I wanted to do a more kid-friendly hummus to serve alongside baked pita chips. I was looking for something that would be fun to serve after school. Plus, I wanted to tweak the recipe so that I could leave out the tahini. It’s not that I don’t like the flavor, but it seems I’m always buying a jar, I use a whole tablespoon or two and then within a week or so it goes bad. So what to replace the tahini with?

I figured that tahini adds a bit of healthy high-fat content with all those ground sesame seeds. So why not substitute it with another similar ingredient? Peanut butter. I throw a little peanut butter into all sorts of unexpected places – from chili to stir-fry sauces. The roasted nut flavor adds a layer of depth; I was hoping it would do the same for my hummus.

Now, I didn’t want the peanut flavor to overwhelm the more subtle taste of the chickpeas, so I didn’t use a lot – and I also tossed in some sesame seed oil to give it a hummus vibe. But my hummus lacked the oomph that garlic would have given it. My solution? Cinnamon. I know, I know: Sounds strange, but cinnamon in Middle Eastern foods isn’t a stretch, so I thought it was worth a try. The flavors blended perfectly.

I’ll warn you, though: If you’re looking for the traditional hummus flavor, this isn’t it. But if you want to try something a little different that still has the satisfying texture of chickpeas but with a more snacky feel, give this peanut butter-cinnamon hummus (and pita chips) a try.