Searching for Michigan Made Foods 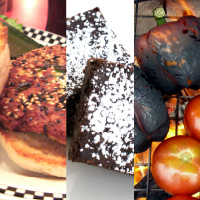 As Crumbs’ yearlong effort to track down great local restaurants – and the chefs behind them – comes to an end, I wanted to let you know some of my favorites. This wasn’t an easy choice. This past year, I’ve been able to interview chefs from a variety of backgrounds, both do-it-yourselfers who’re now making a living from their baking to culinary school-trained chefs who work at top restaurants.

I’ve been fascinated to learn what they stock in their pantries, to hear about their favorite dishes. Most of all, I love asking about their biggest cooking mistake. They all have one. And most chefs point out, just after they’ve revealed putting too much salt in the brownie batter or burning their favorite sauce, that cooking is all about experimentation – and making a mistakes is part of that.

I have my top three choices of Chefs Share posts below. But first, I need to ask your help. This year, instead of featuring a local chef, I’m going to highlight Michigan-made products. I need to hear from you – what local products do you love and would like to see featured here? Let me know (just scroll down and fill out the form below) and I’ll track them down, find out more, and pass along a recipe or two.

And now for my favorites!

From The Fly Trap in Ferndale, chef Gavin McMillian’s reinvented burger is unusual, tasty and quick to put together.

Maybe it’s because there’s so much snow outside and my grill is gathering dust in the garage, but I loved Chef Michael Metevia’s recipe for grilled tomato soup. Metevia is a chef at Slows Bar B Q in Detroit.

I wasn’t expecting much when Chef Frank Turner from Henry Ford Hospital in West Bloomfield passed along a brownie recipe that included a puree of blueberries and spinach. I was surprised, though, at how tasty spinach-infused brownies could be.

Don’t forget to share your faves. I look forward to hearing from you!