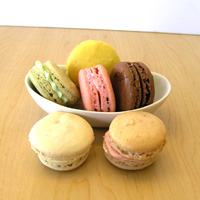 If Lewis Carroll conjured up the most fitting treat for Alice’s little tea party, they’d probably look a lot like French macaroons.

They’re pretty, petite and pastel – and the perfect confection for girls of all ages. I’m sure boys would enjoy them, too. They aren’t just lovely; they’re also luscious. But let’s not be fooled: These treats are as girly as a toy poodle with a pink-polished pedicure. And, frankly, that’s a big part of their appeal.

These little round sandwich cookies that we stumbled across at Pinwheel Bakery in Ferndale would be right at home at a baby or bridal shower or a girly-girl gathering of any variety. This French variation, which has nothing to do with its traditional coconut cousins, is made of two almond meringue discs that are crunchy, light and sweet. The discs are joined together in mmm-inducing matrimony with chocolate ganache, lemon curd or some fabulous flavored butter cream, depending on the flavor of the cookie. The ones we tried were pistachio, vanilla, chocolate, raspberry, strawberry and lemon, but Pinwheel offers a variety of flavors. It just depends on the day, says owner Ann St. Peter.

Our staff was over the moon about the pistachio flavor. It was our favorite of the selection. But honestly, we liked them all. The raspberry, strawberry and lemon were so fresh-tasting – a sweet preview sampling of summer. And, as Karen at Pinwheel described, the vanilla macaroon tasted just like a vanilla ice cream cone would, if it came in a cookie form. Très magnifique!

If you haven’t heard of French macaroons, Ann says you probably will soon.

"They’re the new cupcake," she says. "What Sex and the City did for cupcakes, Gossip Girl is doing for French macaroons."

NPR recently did a story on how French macaroons (or macarons, if you want to be all French about it) are the next big thing in the pastry world. And they’ve been featured in Food & Wine magazine. Simply stated: They’ve arrived.