Chicken tacos, shrimp tacos, pulled pork tacos – the options are endless. Here are six taco recipes to try for your next family meal. 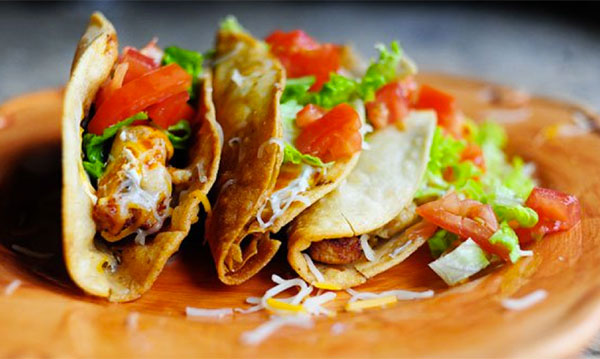 Each year, Americans eat 4.5 billion tacos. That’s a lot of tacos! No doubt, many of those taco eaters are pint-sized. Tacos are a kid favorite.

Part of the appeal is that kids can help put them together and then they get to eat them with their hands.

For the classic version, try making all American beef tacos. Or go leaner with chicken tacos.

Make a big batch of slow cooker pulled pork tacos to feed a crowd. Or, what about filling them with seafood like shrimp tacos?

You can even have tacos after dinner – that’s right, try making dessert tacos.

Make your own taco seasoning mix with this recipe for all American beef tacos from The Food Network. Alton Brown, the king of all things culinary, recommends a subtly spicy mix of chili powder, cumin, hot smoked paprika, ground coriander and cayenne pepper. Brown ground beef and then add the seasoning mixture.

Slice boneless, skinless chicken breasts into thin strips and crisp in a sauté pan. Stir in two cans of diced green chilies. Sprinkle with seasoning and then pair the cooked chicken with shredded lettuce, diced tomatoes and a smattering of cheese in toasted corn tortillas. The final step behind these chicken tacos from The Pioneer Woman is to crisp them in hot oil.

Pour two jars of salsa over a pork shoulder in the bottom of a Crock-Pot. Add chili powder, cocoa powder and dried oregano on top, then cook on high for four to five hours. Once these slow cooker pulled pork tacos from Real Simple are done shred and serve with warm, corn tortillas.

These shrimp tacos from MyKidsEatSquid are fast and easy to make – done in less than 15 minutes including cook and prep time! In hot oil, cook the shrimp until just pink and slightly crisped. Flavor with cumin and garlic powder. Squeeze with lime to finish it off before stashing the shrimp in corn tortilla shells.